I have a confession to make. I cancelled my subscription to The Briefing. OK, that’s overstating it a little. I didn’t actually cancel, I just let my subscription lapse. And, before I hand in my card as a bona fide Aussie evangelical, the fact that eventually, in 2014, Matthias Media decided to close down The Briefing—Australia’s premiere evangelical magazine—suggests that a lot of you had done the same.

Who knows why? Perhaps, after 27 years some people felt The Briefing was going over the same ground. Maybe the rising tide of the internet simply carried readers away from magazines altogether. No doubt many never even knew it existed. But it was a shame. When it was on form, The Briefing could be very, very good. And much of its best writing came from the keyboard of its editor, Tony Payne. 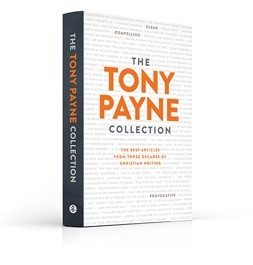 Whatever your history, the good news is that 57 of Payne’s articles from The Briefing have now been gathered together to form The Tony Payne Collection—and it’s great. Reading it reminded me of a friend who once trudged home from a long day of work sustained by the knowledge that an entire tub of hokey pokey ice-cream awaited him in the freezer. Peeling off the lid in joyful anticipation, he was startled to discover that the whole 2 litres had been mined clean of butterscotch balls. Only vanilla icecream remained. Remarking on this extraordinary phenomenon to his wife, she confessed that she’d wanted one butterscotch ball, but having started, she couldn’t stop. That was my experience of reading TTPC. It’s all butterscotch.

The articles in this collection could best be described as bite-sized, ranging in length from one page up to fifteen, with most around the six page mark. Long enough to involve serious thought and reflection, but short enough that they are easily digestible, even by those of us raised on a diet of blogs and Facebook posts. They are grouped into 11 different sections, beginning with truth, the cross, and discipleship, before moving on to the hot potatoes of homosexuality, social action, and the charismatic movement, and ending with theology and the Bible, prayer and praise, church, evangelism, and ministry. Together they form a first-rate practical primer on Christian life and ministry.

Payne’s great strength is the clarity of his writing. Clive James once commented that Gibbon’s Decline and Fall of the Roman Empire left you feeling that the reader had to do more than their fair share of the work. TTPC is the precise opposite. The hard work has gone in at the author’s end, and the reader reaps the benefits. His style is so clear and refreshing that it’s like drinking a cool glass of water on a hot day. More than once I found myself chuckling at the sheer, unadulterated pleasure of it.

Payne’s prose style is not the only thing characterised by clarity; his theological thinking and sociological analysis are remarkably limpid too. He keeps God’s word at the centre of our thinking, and Christ crucified at the heart of our affections. That focus comes out of a self-evident love for God and his church. Indeed, Payne’s desire to grow God’s kingdom and serve Christ’s church informs everything in this volume. The tone is warm and encouraging. At times it is even laugh-out-loud funny – in a dry, Australian kind of way. Even when Payne is rebuking and correcting he does it with humility, gentleness, respect, and a real warm-hearted desire to see God’s people grow to become more like Christ.

His style is so clear and refreshing that it’s like drinking a cool glass of water on a hot day.

Reading some of the articles today does feel slightly odd. Not because of the articles themselves, but because Australian culture—both inside and outside the church—has shifted so much in the last thirty years. Reading Payne’s articles about homosexuality, the charismatic movement, and the worship wars, I found myself thinking, Yes, that’s right. That’s how things were. We have changed, and I had forgotten that we had ever been different. The sexuality agenda has expanded, the charismatic movement has changed shape, and arguments about church and worship seem to have largely petered out. For those who don’t remember what Australian church and society were like in the 80’s and 90’s TTPC is a fantastic introduction and a great example of sociological analysis in service of the church.

The only articles I found myself disagreeing with were some of those addressing the nature of church. Payne’s critique of restricting worship to Sunday, or worse, to the singing on Sunday, is hard to argue with, but I am not persuaded by his conclusion that church is simply about gathering, not worship. “Gathering for what?” we might ask. Doesn’t the Bible explicitly depict the great assemblies at Sinai and before the throne as moments of collective worship (Ex 3:12; 7:16; Rev 7:11, 15)? Isn’t church meant to be vertical as well as horizontal? Surely we gather to worship God by encouraging one another, and we encourage one another as we worship God together?

That minor quibble aside, TTPC is excellent. Occasionally confronting, frequently thought-provoking, and always Christ-focussed, the writings of Tony Payne deserve to engage a whole new generation of readers. I look forward to acquiring a stack for our Mid-Year Conference and getting them in front of as many students as possible.

Ben has been married to Shelley for 14 years and they have one daughter, Emily. He serves with the Australian Fellowship of Evangelical Students at the University of Western Australia.

Let’s name the brutal truth first: Australian churches have been in more or less unmitigated decline since 1963. As from that date, fewer and fewer people have been involved in our churches, fewer people have been connected to our ministries, and almost every major Christian denomination has had fewer people wanting to own them in the census, even if only to identity the church they no longer attend. There have been bright patches. Theological education in Australia is strong. Student work is a bright spot. There have been revivals in Aboriginal communities in the 1980s and 1990s with substantial and long-lasting...