In October last year, Mark Zuckerberg announced his company’s next global-scale endeavour. Meta is building the metaverse, a virtual reality that will trump our physical realms in every respect. Convenience. Visual appeal. Self-expression. Novelty. With minimal gear and Wi-Fi, you can “teleport instantly as a hologram to be at the office without a commute, at a concert with friends, or in your parents’ living room to catch up.”[1] Zuckerberg’s imagined future hinges on one assumption: visuals will get so close to mimicking reality that humans would prefer to live in an artificially engineered, rather than actual, world.

After reading Competing Spectacles, published before the birth of Meta, I am tempted to believe Zuckerberg’s assumption is not entirely far-fetched. Reinke writes persuasively about the power and pervasiveness of visuals in the modern world, particularly the creation of spectacles.

Spectacles here do not refer to eyewear. Rather, Reinke uses its secondary, less common definition, namely a “specific image, event or moment” (14) that becomes the object of our fixation, both personally and collectively as a society. Spectacles have the power to move us to tears, horror, action, joy, lust, or remorse. Some spectacles of recent times include Squid Game, the volcano eruption in Tonga, Barty’s triumph at the Australian Open, Grace Tame’s icy encounter with Scott Morrison, and, of course, the allure of the metaverse. 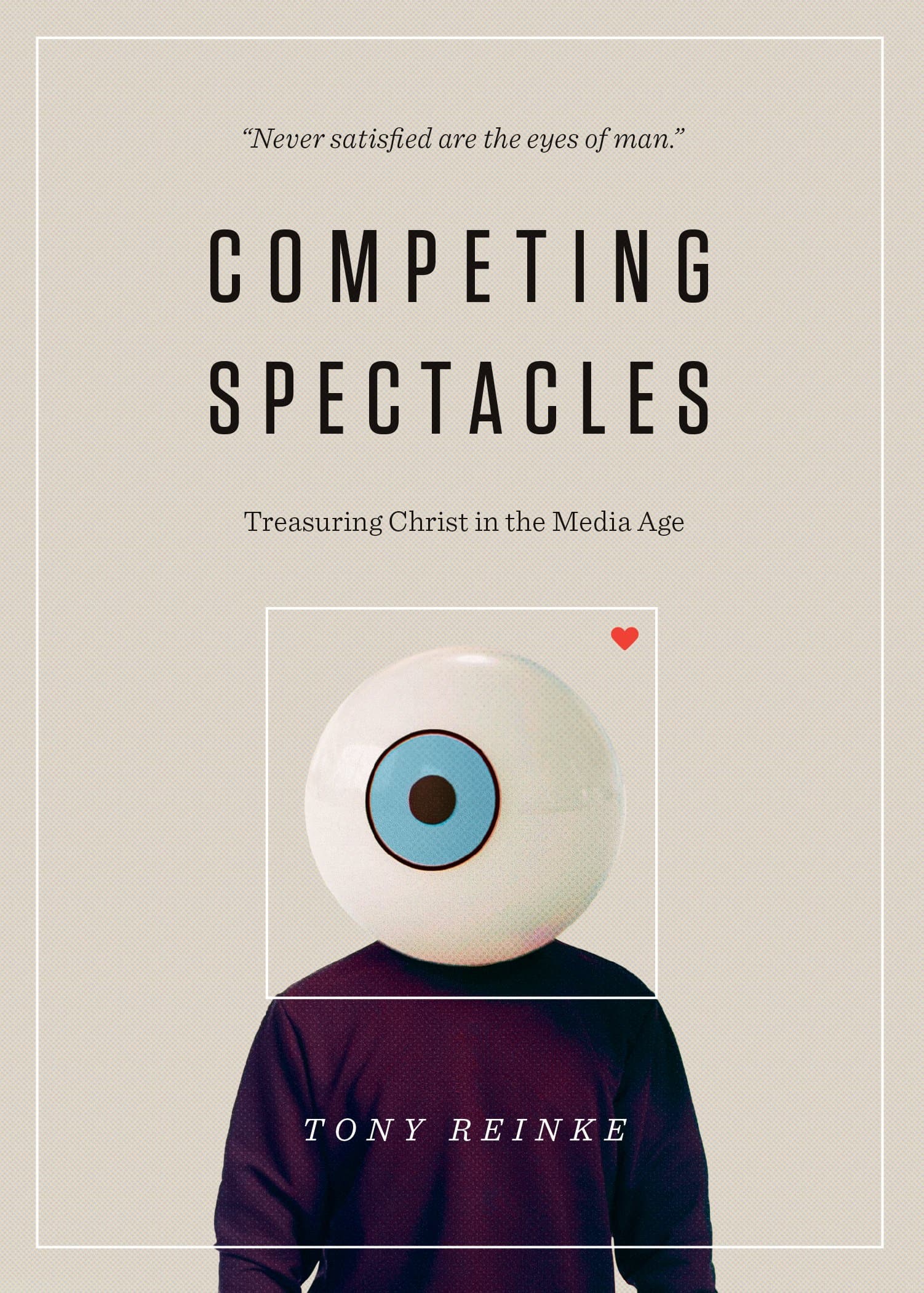 We live in a world full of shiny distractions, that can quickly erode our hearts, making it more difficult to walk through life actively treasuring that which is most important and yet invisible: Jesus Christ. In a journalistic style, Tony Reinke shows us just how distracting these spectacles in our lives have become and calls us to ask critical questions about what we’re focusing on. He offers us practical steps to redirect our gaze away from the addictive eye candy of the world and onto the Ultimate Spectacle—leading to the joy and rest our souls crave.

Spectacles have the power to move us to tears, horror, action, joy, lust, or remorse.

In response, Reinke’s Competing Spectacles seeks to address a two-fold question: What are the specific dangers of living in an image saturated world with spectacles attempting to captivate us at every turn? And, consequently, how can Christians continue to live faithful, godly lives? I was personally encouraged by several of Reinke’s reflections:

Reinke’s answer for the Christian wanting something to captivate their roving eyes is this: to continually behold the glory, irony, and beauty of the cross of Christ.

The Challenges of a Christ Unseen Today

But can we truly be called witnesses of God’s Ultimate Spectacle if we did not in fact see the risen Christ? Can we be captivated by Christ when we can’t see him? That Christ is unseen today is, I think, one reason Christians struggle in their walk with him.

Yet Reinke fundamentally disagrees with the notion we could be less captivated with Christ’s death and resurrection than the original eyewitnesses. Christ reveals himself to us through his Word, and thereby “feeds our faith” (92). Christ’s Spirit lives in us, working through “the bold and clear preaching of the cross” (84) to reveal Christ’s glory. Scripture is emphatic: faith comes through hearing, not through seeing.

Of course, God does give us visual signs of himself through his creative work, through which we can learn of his character: “the heavens proclaim the glory of God, and the sky above proclaims his handiwork” (Ps 19:1). However, these physical signs do not replace the greater wonders that, for now, can only be ‘seen’ by faith, and not sight. Moreover, they become dangerous when they overly capture our imaginations and desires, rendering us “cold, sluggish, and dull to unseen eternal delights” (143). What are these eternal delights of which we easily lose sight? They are the complete work and person of Christ, who is our:

In sum, they are the spiritual realities purchased for us through his death and resurrection on the cross.

This temptation to disbelieve in or dismiss the unseen God is one I face in my own life everyday: when I live as if Jesus is not returning; or forget I am merely stewarding what he has given to me; or fret over the salvation and sanctification of my friends. And often, as Reinke identifies, the reason I give in to these temptations is because I choose to believe in what I see in the world, and not what I hear from God’s Word.

The reason I give in to these temptations is because I choose to believe in what I see in the world, and not what I hear from God’s Word.

Here, then, lies the challenge: Until we see Christ again, will we resolve to stay committed to believing in him and his promises, despite living in “a world bombarding us with earthly spectacles for the eyes” (92)? Will we trust God to build our faith and church through (largely) the unseen, or at most through the unglamorous—the simple “faith-based microspectacles” (101) of the church, like preaching from the Bible, water baptism, or the Lord’s Supper?

What We Need to Keep Believing in the Unseen

Competing Spectacles is not meant to be a book that provides spectacle prescriptions (pun intended)—guidance on what spectacles to indulge in and what to veer away from. Instead, Reinke’s summations are general and principled in nature. They are sensible and biblical, encouraging the believer to take Jesus’s commands about lust and greed seriously (1 Jn 2:16), to “set our minds on things above” (Col 3:1-2), and to remember only the “pure in heart” will see God (Matt 5:8).

Although I found Reinke’s systematic approach in offering biblical principles helpful, I wish this book had offered more practical tips on how to apply them. I had questions like: How do I “regularly put [myself] before God’s spectacle banquet”—beyond reading my Bible and being committed to my local church (137), things I already do? What spectacles should or should not be indulged in? Reinke is careful not to draw blanket rules when it comes to this latter concern, which is sensible, but it leaves the hard work of discerning the health of my visual diet to myself.

For this book to be most effective, readers must reflect on their learnings in ongoing, honest conversations with trusted friends and counsellors, working out for themselves how best to apply Reinke’s reflections from God’s Word.

We Become What We Watch

This book has provided me with the vocabulary to articulate my uneasiness with today’s media content, and the dangers of senseless indulgence in it. Reinke’s observation is apt when he says, “we are creatures shaped by what grabs our attention” (19). Knowing this, it is imperative we become thoughtful about what we choose to indulge in.

God has not called us to be minimalists in the way we honour him—wondering what viewing habits we can get away with—but to maximise our worship. That is, as individuals, we are to see a direct link between what we are internalising and who we become, so that our desire for the glory of Christ, and our imitation of him, are the yardsticks of our entertainment choices. May God empower his children to pray like the Psalmist, so that we join in saying, “Turn my eyes from looking at worthless things; and give me life in your ways.” (Ps 119:37)

Renee Zou works in a corporate law firm. She is married to Leonard, and they both worship at Cross & Crown: Melbourne, a church plant in Melbourne’s Eastern suburbs. In her spare time, she enjoys reading books, drinking coffee, exercising and spending time with her friends and family.