Book Review: The Suburban Captivity of the Church by Tim Foster

This is an interesting and thought-provoking read. It offers excellent insights into the culture of the modern Australian city and is an important book for anyone wanting to think incisively about urban gospel ministry. You won’t agree with everything on this book. I didn’t. But it will get you thinking.

Tim announces his thesis on page 2: “Far from being culturally neutral, the gospel that we evangelicals proclaimed was loaded with the cultural baggage of suburbia”. He establishes his case well. Tim’s breakdown of the Australian community into battlers, suburbanites and urbanites is a generalization, as Tim readily acknowledges, but it is nonetheless helpful. His description of the “cultural narrative” for each of these groups is insightful. Tim argues that evangelicals have emphasized some aspects of the gospel message that play well to suburbanites but don’t play well to battlers and urbanites. His contrasts between the SUV driving suburbanites and the prius driving, public-transport loving urbanities and the implications this has for ministry are persuasive. His perception of the inner west of Sydney as occupied by battlers and urbanites rings true. These two groups are estranged from each other and from what might be called conventional evangelical ministry. 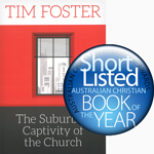 In chapters 2 and 3, Tim offers a set of tools for exploring cultural narratives that will be useful beyond the particular cultural narratives he analyses. This is the heart of the book and its strongest contribution. It would be a mistake to read this book as a mechanical how-to book for urban ministry. Tim warns us that he is not offering a contextualized gospel for every culture and subculture. However, some may feel the book is a bit narrow. Readers outside the metropolitan areas of our major cities will feel excluded from the conversation. Readers who are not Anglo or not Anglican might feel that the book neglects important aspects of the national narrative. The role of 20th century migration in shaping Australian cities is not sufficiently appreciated. The way Catholic and other Protestant traditions have played a role in shaping our cities, especially in cities other than Sydney, is entirely absent. The oft repeated folklore about Richard Johnson (the first Anglican chaplain to the colony of Sydney) is, as is often the case, overstated—no-one except Sydney trained Anglican clergy think he is all that important in the creation narrative of modern Australia. (I’m editing this paragraph while sitting underneath the enormous statue of John Dunmore Lang in Wynyard Park — let the reader understand.) 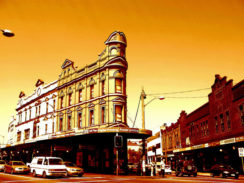 My main quibble revolved around chapter 1. Tim contrasts a punitive gospel and a telic gospel. At times it is hard to know if Tim is attempting a universal corrective and suggesting the telic gospel is right and the punitive gospel wrong, or is simply suggesting that the telic gospel presentation is a helpful approach in some particular contexts. The negative title of “punitive gospel” seems to suggest a universal villain. Tim observes that the “many dimensions of the cross provide a great deal of scope for contextualizing the gospel and applying the achievement of the cross to a particular culture” (page 20). However, it is unclear whether Tim is suggesting that one particular dimension should be emphasized in a particular culture and others underplayed or not mentioned at all. Tim’s aversion to the language and notion of kingship, a concept so central to the Gospel Jesus preached, is perhaps one case in point. The reader will need to ask whether the inability of a particular gospel framework to provide a key place for the notion of kingship within that framework suggests a profound inadequacy of some kind in the framework itself.

Also, the punitive gospel, as Tim describes it, seems to be one that emphasizes the atonement and has an under-realized eschatology. These two notions are bundled together. It is quite clear how a gospel with an under-realized eschatology — one that is all about an ephemeral heavenly hereafter — has little power to engage most cultural narratives. Tim makes a strong case. It is less clear why the atonement needs to be downplayed. As Tim articulated various gospel presentations that might speak into different cultural narratives it was not always clear why the notion of the atonement was given so little opportunity to make a powerful contribution. Tim has ably pointed out the way others have inappropriately brought their baggage into their gospel presentations, often as an overreaction to those who have gone before them. The reader will need to consider whether Tim’s own presentation in chapter 1 is also an example of this problem.

Enough of the quibbles. This is a great book for helping Australian evangelicals to think like missionaries in their own cities. It is easy to simply criticize. Tim has sought to serve us by both carefully critiquing current evangelical practice and proposing a better way forward. Tim’s attempts to articulate the gospel in a way that relates to different cultural narratives is a real strength of the book.

This is a hopeful book, pointing out that urbanites are often more easily engaged by the gospel than the suburbanites and battlers who have much more fixed and coherent cultural narrative that is harder to challenge.

This is a book that will be relevant for some time to come. It gives us good tools for being missionaries in the ever changing landscape of the city. As a city dweller, my own experience and the statistics both indicate that the two fastest growing segments in inner city Australia are now internationals (mainly professionals from China) and empty-nesters. These groups are as different again in outlook as the differences between suburbanites and urbanites.

This book bristles with interesting ideas and intriguing insights. I would have liked to have seen Tim expand on the idea that tribal affiliation is in some cases becoming less about geography. I wonder what challenges and possibilities this opens up for gospel work. Also, I kept on thinking about the pros and cons of homogeneous churches. Some more space to that issue would have been good. But perhaps this asks too much of one book. Maybe Tim has given us firm shoulders so that others can use the tools he provides to continue debating these important issues in fresh ways.

Tim Foster’s book has been shortlisted for Australian Christian Book of the Year.