I am very grateful for the opportunity to review this book—and very confident that it will not disappoint anyone who has any interest or involvement in preaching. That is because it does what it was intended to do:

I am very grateful for the opportunity to review this book … it does what it was intended to do.

… to provide a resource to pastors and students that sets out the theological foundations of preaching, so that we might be more faithful practitioners. (p. xx)

Some of the credit for this must go to the editors, who (I assume) selected the contributors and the topics they discussed. Twenty-one authors are involved: three from the UK, one from the US, and the rest Australians—most of them connected with Moore College. Their essays are divided into five sections:

The essays are sufficiently self-contained that readers can engage with each one separately, without needing to read each section or the whole book to benefit from its contents. And the result is much richer than it might have been, because readers are not being asked to “look at preaching through these spectacles” but to “consider preaching from this perspective … and this … and this …” It is also much more accessible than it might have been, because the editors appear to have told the contributors, “Don’t waffle or ramble: say what needs to be said and be done with it!” 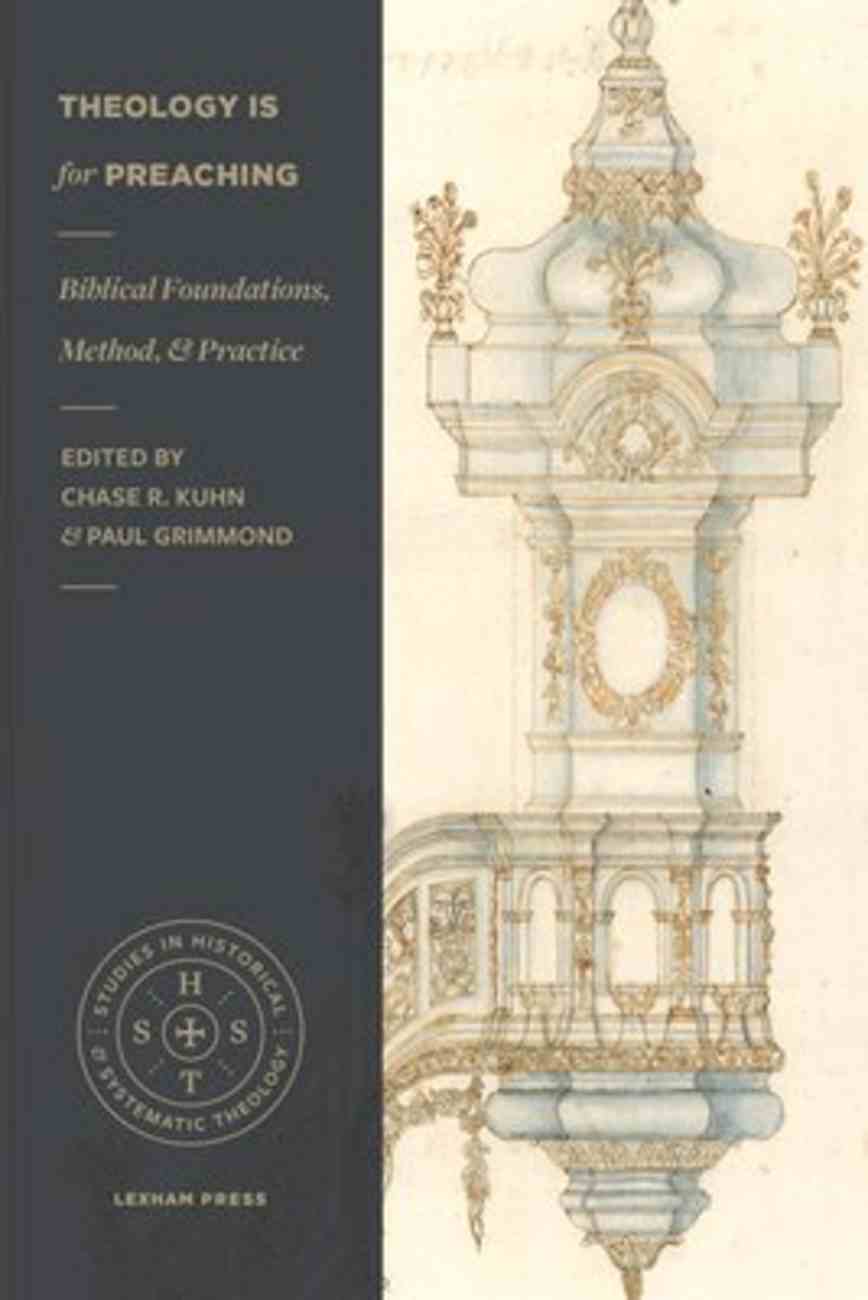 Theology Is for Preaching: Biblical Foundations, Method, and Practice

Theology Is for Preaching: Biblical Foundations, Method, and Practice

The authors also deserve credit for the value of the book—because each of them has done just that! No essay is longer than 16 pages—and none sacrifices depth by being economical in length. To give just one example: one of the book’s greatest riches is its probing analysis of the contents and implications of passages such as 1 Corinthians 1–2; 1 Corinthians 10; 2 Corinthians 3–4; and Hebrews 1–2 (as well as other parts of both the OT and the NT). This sends an important signal to the alert reader: sermons don’t have to be very lengthy in order to be richly nourishing and deeply challenging!

The book frequently reminded me how much we have to thank God for, especially in the light of the marked contrast between what was and what is. When I began preaching nearly sixty years ago, the only helps I had were Charles Simeon’s, Let Wisdom Judge, Alan Stibbs’ Expounding God’s Word and John Stott’s, The Preacher’s Portrait. They were great quality, but I needed much more training and equipping than they could provide.

This book clearly demonstrates the existence of a strong ‘preaching culture’

How much better, it might have been if I could have begun now instead! Not because I would be any better at it than I was then—but because the setting has changed so much. This book clearly demonstrates the existence of a strong “preaching culture” that encourages and shapes the public exposition of God’s word. This is evident in the bibliographies, in the obvious common ground between the multi-denominational and multi-national group of contributors, and in the breadth and depth of the perspectives on this very important ministry—all of which should lead us to deep gratitude to God for bringing us this far.

Yet, as we all know, true gratitude will not find us resting on our laurels—and not only because that means wearing them on the wrong end! Being grateful means not squandering this heritage, or even just passing it on intact. We must keep making it stronger and deeper (Matt 25:14-30). And that is where I think we have a real problem!

This involves the way we—and not just the book’s authors—use the word “preaching”. Some of them mean, “giving the sermon in a Christian gathering”, with good examples on pages 35, 108, 222-223, 264-265. Others have given it the sense, “proclaiming the gospel in a public way,” with examples on pages 201, 225, 235. I think the time has come to abandon this second use, because its flaws are too serious.

I suppose “preach” once meant “proclaim”—because our Bible translations use it this way—but in modern English it has only two senses. The first is a “church” meaning: it is about giving sermons. The second—and much more likely—use for most Aussies is very negative, with, “don’t you preach at me!” the indignant response to what feels like a critical “lecture” about my behaviour. But is this any reason for us to stop using “preaching” to refer to “public proclamation of the gospel”? I think the answer is “Yes”, because of two significant problems. It seems that we haven’t recognised them already because we are so thoroughly habituated to this ecclesiastical English!

The first of these problems is seen in various places in the book, including this example on page 31:

[There] is a theological reason why [preaching] continues and why it is right and proper, even necessary, for it to continue … preaching reflects the character of God, God the communicator …

But since God’s communication with us is not exclusively oral—as we recognise whenever we refer to the Bible as the word of God—why is it essential to limit our communication of his message to “preaching”? And if this is essential, what are we to make of the fact that so many believers live in parts of the world where preaching would be a death sentence? Indeed, how did they become believers at all, if there was no preaching? The obvious answer—that it was the gospel that God used to do this—shows us where this quotation gets it wrong: what is always necessary is the gospel, not any particular method of communicating it.

This problem becomes more acute in statements that attribute to preaching what only the gospel effects, as in these examples from pages 206 and 235 respectively:

The New Testament is quite clear that preaching and salvation are necessary corollaries.

[Preaching] is a necessity of the eschatological age. It is his appointed way of bringing salvation to the lost. It is indeed the very scepter by which Christ reigns … over the souls of men and over the nations of the earth.

The Lord who said, ‘I will build my church’ (Matt 16:18), is most certainly doing so in all the places in our world where no preaching happens!

Surely not! The Lord who said, “I will build my church” (Matt 16:18), is most certainly doing so in all the places in our world where no preaching happens! Because he saves and rules us by his gospel; whether it is whispered in the ear or proclaimed from the roofs.

Even worse are the claims of P.T. Forsyth and John Stott, quoted on page 199:

[With] preaching, Christianity stands or falls …

[Preaching] is indispensable to Christianity.

In addition to the problems just identified, these add another. It is far too easy to hear them as saying that the preacher is the key to the survival of Christianity—and that is a very dangerous thing to say to sinners who are already battling with pride in the way that all preachers must do!

The second major problem with using “preach” so broadly can be stated very simply. If Aussies are to be saved by the preaching of the gospel, then they really are in big trouble—because the unconverted millions are not in church to hear our sermons! These might be “public” in the sense that anyone can come to listen, but in today’s Australia that hardly ever happens.

There is an obvious objection here: the fact that Jesus said, “the gospel must be preached to all nations” (Mark 13:10)! Even if we accept that translation for now, was he attaching “must” to “be preached” or to “all nations”?

Jesus himself gave first priority to heralding and did a great deal of it.

In that world, when people needed to know something vital, they would most often learn it—directly or indirectly—from a herald making a proclamation wherever people gathered in large numbers.

What this tells us is that “must” refers to the universal scope of this great task and not to the way it was to be done: there was no reason for Jesus to require “heralding”, as it would have happened anyway. To understand him differently would be to get things very muddled. For example, consider his mission-charge to the disciples (Matt 10). It is clear that he assumed they would walk (verses 10, 14)—but does that mean that John Wesley was being unfaithful when he mounted his horse, or that Billy Graham was when he boarded a plane? What Jesus commissioned the disciples to do was to travel from place to place (verses 11, 14, 23), which they were most likely to do on foot—but Jesus wasn’t requiring them to walk. They would not have disobeyed him if they had ridden donkeys that were loaned to them!

The key point is this: to keep insisting that we must “preach the gospel” is to make the same mistake as the senior citizen who claimed that if the Lord had meant us to fly, he wouldn’t have given us the railways! Or to be like the pastor who complained that people don’t bring the Bible to church any longer, by which he meant that they don’t arrive with a book in hand—although he had failed to notice that when the Bible was being read and expounded, they brought out their phones! It is not faithfulness but foolishness to privilege only one method of doing what the Lord has commissioned us to do—especially when more, and possibly more efficient, options become available.

The great task the Bible gives us is a twofold responsibility. We are to communicate the gospel: we must make it known—and should do so as clearly and fully as possible. We are also to broadcast the gospel: we must spread it—and should do so as widely as possible. Since this is our task, it would be much better for everybody if this is how we talked about it! And if we did so, we would be confronted constantly by the urgent question, What are the best ways of communicating and broadcasting the gospel?—a question that is too easily muffled by talk about “preaching” the gospel!