In 1942, at the parsonage of the Lutheran church he shepherded in
central Austria, my grandfather received the following slip of paper;
his call-up for active service in the Wehrmacht. 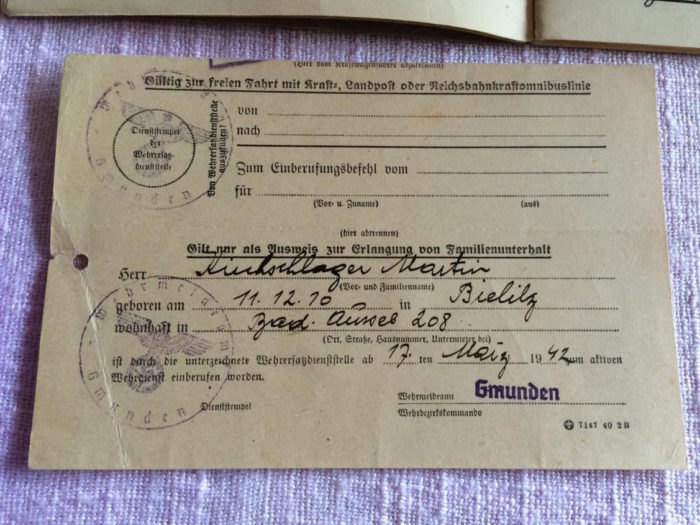 Although his status as clergy might normally have led to his exclusion from conscription, being a member of the Confessing Church (that movement that opposed Hitler, including Dietrich Bonhöffer) meant he was always destined at some point to have to fight. He got on a train bound for the Eastern Front and wasn’t seen by his family for another 4 years

That my grandfather fought for the aggressors in World War II is beyond doubt, not that he himself had much choice about it. We can look back at those years and clearly identify a “right” and “wrong” side. Sometimes, however, it’s not so clear. This is, of course, not a new question. In the 13th Century Thomas Aquinas argued that a “Just War” could only be established when a rightful sovereign declared it, a just cause existed and that belligerents entered into war with the right intention; to advance the good at the detriment of evil. (Summa. 2.2.40)

Aquinas clearly draws not least from Paul’s statements in Romans 13.

Whereas in the previous chapter the Apostle urges us as individuals not to rush to revenge, since this is God’s prerogative (Rom. 12:19), he now shows us how, perhaps, God will seek his just retribution – through the governments he has ordained (Rom. 13:1). What is jarring about this is that the ruling authority, to which we are all called to submit (Rom. 13:1), may not itself be pure as the driven snow. The letter to the Romans was written while the church found itself under the rule of the despotic Nero.

All of this means, I think, that when American soldiers landed in North Africa in late 1942 and captured my grandfather along with countless other German soldiers, there is a sense they were carrying out a just and godly act. Of course we don’t want to discount wider questions about war crimes and individual responsibility but the wider principle, I would suggest, is well-established in Scripture. The obvious conclusion that I can’t avoid, therefore, is that as our nation contemplates expanding it’s military action in the Middle East, that same principle tells us that we ought to be using that force which we have to punish those evil-doers we can clearly identify.

Can I be so bold as to suggest that the question might even become not “do we have the right to do this?” but “how can we not do this?”?

Could it even be that
Christians ought to be speaking up and urging our government to fulfil
their God-mandated responsibility to come to the aid of those most
oppressed by evil, not out of some misplaced desire for war but out of a
deep sense of justice? Can we really sit back and watch the Hitlers,
the Pol Pots, the Saddam Husseins and the ISIS’s of this world run amok?
As today we consider how we ought to address the current humanitarian
crisis developing in Syria, don’t our governments have a calling from
God to intervene?

Of course even as I write this I feel
uneasy. God is a God of peace, isn’t He? Jesus is the Prince of Peace.
And yet the Scriptures prod me with constant reminders that God’s peace
might look different to the way I think it should. Throughout the
Scriptures are reminders of God’s status as warrior (Exo. 15:3; Isa.
42:13 etc.) fighting on behalf of his people to save them. It’s not a
coincidence that one of his names is “Lord of Hosts (Armies)”. Nor is this a
uniquely Old Testament representation of God. If anything, the New
Testament only amplifies the image, most notably as we see the Lord
Jesus Christ,

This final devastating battle charge is one that will right every wrong, casting down all evil that sets itself up against God (Rev. 19:15 cf. Rev. 14:19-20). We are told these confronting truths not only to provide assurance to the Christian that there will be vindication, but also to encourage those who have not yet bowed the knee to King Jesus to do so. He graciously offers forgiveness to all who have rebelled against him. He demands an unconditional surrender and then proceeds to pour his good and gracious gifts upon those who come to him.

When my Grandfather returned from a POW
camp in 1946 he arrived to a hometown under American occupation with
the first U.S. aid, a precursor to the Marshall Plan, already arriving.
The German government had had the good sense to surrender to the Allies
before total devastation came and were now receiving good things from
their former enemy. So it is with the gospel. The choice before each and
every one of us is to fight to the death against God or to surrender to
him and receive his generosity poured out upon us. I can’t help think
that this is also the way we need to view our own military conflicts. If
the governing authorities act as God’s agent when they go to war, then
surely they must also act as his agent after terms of surrender are
received; graciously pouring out good things upon former enemies.

I
know that these aren’t simplistic matters, and I don’t discount the
complexities of the current situation but when it comes down to it, if
our government approaches this question with those God-ordained
priorities clearly before it,
as it appears the Scriptures call
them to
, then for all our good and proper desire for peace
I’m slowly becoming convinced that war might just be the right way
forward.

One wonderful day the Lord will beat every sword into
ploughshares and every conflict between nations will be ended (Isa. 2:4)
but until then he calls our government to wield it’s sword for good.