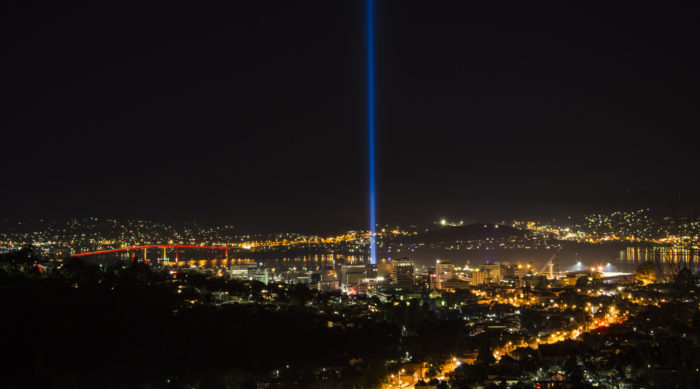 This is what Hobart looks like by night at the moment. Rafael Lozano-Hemmer’s Pulse Column, a light installation that mimics the heartbeat of whoever is holding the electrode at it’s base, dominates the skyline. Eyes all over the city are drawn firstly to the light, and then upwards to the heavens.

It’s part of Dark MOFO, the bacchanalian winter festival which celebrates darkness through art, music, food, performance, film, and noise. Organisers are expecting over 130,000 people to attend. More that 250 local, national and international artists are participating in the 10 day festival. Marina Abramović is here. So too are thousands of visitors. I’m told that beds in the city are scarce, and expensive.

This is Dark MOFO‘s third season. And it’s turned out to be a huge boost for our normally stagnant winter tourism market (it’s stagnant for a reason – an apparent temp of 2.6 at the moment isn’t exactly beckoning me away from my open fire).

And I’ve got to say that it is kind of fun knowing that the artistic eyes of the nation are, for the moment, on my city. Did you see the story about us in the Weekend Australian? Or the Guardian? Or the Age? Hobart is more than cold in winter. All of a sudden, it’s become cool.

The Museum of Old and New Art (MONA) is, in one respect, the best thing that has happened here for years. Creative juices are flowing down city streets. Millions of dollars are pouring into our economy from all over the globe. Work has started across the road from our church in the city on two massive developments which will see 550 new beds added to the city’s accommodation. If cranes in the sky are signs of progress, Hobart is progressing.

But the nihilistic, voyeuristic, aggressively atheistic worldview that drives MONA’s creator and owner, David Walsh, imbues just about everything connected to his side-project, Dark MOFO. If you want, you can hear the Tasmanian Symphony Orchestra perform Cherubini’s Requiem in C minor, written after the death of Louis XVI. Or you could check out Antony and the Johnsons or the British indie art-pop collective The Irrepressibles. Or, you could buy tickets to the adults only late-night ceremonial death dance called Blacklist, or you could end the week with a Nude Solstice Swim on the Derwent which last year attracted 700 shivering bodies.

The whole week is pretty full on and, at times, deeply unsettling. Upsetting even. Which is just the way the organisers likes it.

Dark MOFO is an extension of MONA. It’s about secrecy and licentiousness and freedom and pleasure. It’s about embracing and enjoying darkness.

So the inclusion and popularity of Rafael Lozano-Hemmer’s Pulse Column is a wonderful, maybe even undermining, touch of irony.

3 The Hypergrace of Joseph Prince: A Review of ‘Destined to Reign’

Review: The Air We Breathe by Glen Scrivener

Are Natural Disasters the Judgment of God?

Love Across the Divide