Canadian singer, poet and writer Leonard Cohen died on Monday, aged 82. He was writing and performing right up to the very end, releasing an album only last month. Titled You Want it Darker, it was replete with the biblical imagery and haunting melancholy that have marked his work for nearly 50 years.

Born to a Jewish family in Montreal in 1934, he was raised in a deeply religious environment. He has said, of the Bible, that “It was not forced on me, I received it like honey, and I found all the stories equally beautiful, from the Creation to the Apocalypse.”

Spiritual concerns marked his songwriting from start to finish and, even though he spent years in a Buddhist monastery, it is the Judeo-Christian tradition that he worried at the most, returning again and again to themes of life, death and meaning.

In his later years, he reaffirmed both his essential Jewishness—according to his wishes, he was buried with Jewish rites—and his fascination with the person of Jesus Christ, whom he described as “the most beautiful guy who walked the face of this earth”.

I can’t claim to be your classic Leonard Cohen fan. I’m more of an admirer from afar than a paid-up devotee. I’m too young for a start (which is not a sentence I find myself writing much these days). His songs were not the soundtrack to my freewheeling salad days, early love or broken heart, which are the usual reasons we attach ourselves passionately to a musician.

Instead, like many I came to him bit by bit, firstly because angel-voiced Jeff Buckley covered Hallelujah in 1994, 10 years after it had been released by Cohen to little interest. But over the years, hundreds of people have sung it, with perhaps its biggest mainstream boost coming in the unlikely form of the first Shrek movie. Now toddlers lisp the words, oblivious to their profundity.

In fact, probably most of us are oblivious to their profundity. Many—half-listening—mistake it for a song of worship, when perhaps it is closer to a lament; ironically, making it much more like a psalm written by the ‘baffled king’ David to whom it refers. 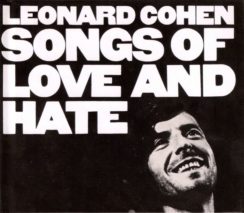 This is the last verse (well, depending on which version you’re listening to, because Cohen wrote multiple verses and covering artists have picked and chosen):

The sentiment—disillusionment bordering on cynicism, but always with a stubborn hope of a trembling flame in the darkness—will be familiar to anyone who loves his songwriting. So will the reference to God, perhaps the subject of more of his songs than anyone else. Even those that do double duty as love songs can turn on a dime and switch their focus to the Almighty, like one of his most well-known, Suzanne, which moves from romance to this:

But he himself was broken, long before the sky would open
Forsaken, almost human, he sank beneath your wisdom like a stone

Always, no matter the brightness, there was darkness. The sensuous Dance Me to the End of Love, with its ‘burning violins’, was inspired by Jewish musicians forced to play for officers in concentration camps, and in Anthem he seems to deeply understand the brokenness of the world:

Ring the bells that still can ring
Forget your perfect offering
There is a crack in everything
That’s how the light gets in.

Cohen’s delivery was deadpan, and his rich baritone always held the seeds of that croaky old man voice that characterised his later years. But that’s one reason why he could keep performing right up to the end—it was never about the voice. Like Bob Dylan, it was more than anything about the soul-searching lyrics, the spare, almost spoken, style, and the sadness and beauty they evoked.

Leonard Cohen appeared to be someone who wasn’t converted but who yearned for communion. On an Australian tour he was asked on stage by singer Clare Bowditch if he believed in God. “Believe in God?” he replied. “I know God!” But alongside this knowledge he never held back his disillusionment and disappointment, his disbelief and despair. Like King David, his songs mourn the world and his own cracked heart.

We have so much to learn from his frank brokenness. If we only ever listen to the healed, how will we understand the wounded?

2 Halloween – A ‘Treat’ of an Opportunity!

5 What are you waiting for? (Part 1) The Patience of Job

Reading Narnia While the World Burns

Over the next few days we hope to publish a few posts to celebrate the seventieth anniversary of the publication of C.S. Lewis’s classic The Lion the Witch and the...

The Lion, the Wardrobe, and the Emperor’s Hangman