The Natural Way of Things, by Charlotte Wood

Sometimes you read two books back-to-back, and by some weird alchemy, they end up provoking more thought in tandem than they would have alone.

In the last week of September, both Margaret Atwood and Charlotte Wood released their latest novels. Since I’ll read anything these two writers will publish, I downloaded them both immediately.

Atwood and Wood – disparate in geography (Canada and Australia, respectively) and age (76 and 50), as well as the length and glory of their careers (Atwood has published, and I’m not exaggerating, over 70 volumes of fiction, non-fiction and poetry, and won almost every prize for which she is eligible – she has no peer) – have a common interest in the lives of women under patriarchy, ethical aspects of the environment and animals, and the human tendency towards violence and evil.

So, a little light reading ahead. 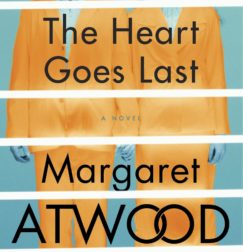 I’m being facetious, but a little light reading is what Margaret Atwood’s The Heart Goes Last turned out to be, although you wouldn’t have thought it from the first half.

Stan and Charmaine are the unfortunate protagonists, the victims of an unprecedented economic down-spiral in the north-east of the USA, reduced to living in their car where they are constantly menaced by desperate gangs out to steal, rape and kill.

Sounds like life in some other parts of the world today.

But the twist in the tale is particularly and ludicrously American. They accept an invitation to become part of an experimental community, one that takes time-share to unexpected lengths. In Positron/Consilience, they’ll have a house rent-free in exchange for sharing it on a month on-month off basis with another couple. On their month off, they are housed in a prison, and given menial jobs to help run the town.

Lots, of course. Like the prison job Charmaine is given, which involves giving a ‘special procedure’ to trouble-makers via a small injection. Ditto the Machiavellian scheming by their alternate householders to ensnare them both in extra-marital affairs. For what purpose? Who are they working for? To what end? 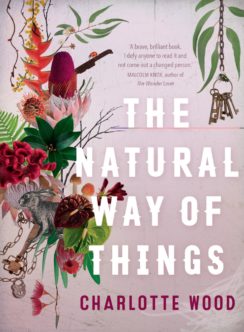 Atwood has a history of exploring dystopian futures with wit and wisdom. Unfortunately, she couldn’t get her tongue out of her cheek for the second half of the book, which reels off into farce. Clever farce, but farce all the same, and the very real questions at the start of the book are never mined to their full depth.

Which brings me to Wood’s new novel, The Natural Way of Things.

A little while ago, I read some of her fine essays on food in Love and Hunger. In one of them she resolved to eat ‘nose to tail’, learning how to gut, butcher and cook an animal so that nothing is wasted.

This experience comes to vivid life in The Natural Way of Things, but rather than an ethically inspired experiment, the ‘nose to tail’ eating in this novel is of dire necessity.

The novel opens as ten women discover themselves waking from a drugged sleep and captive in a barren land. They are stripped, shaved, beaten, dressed in rags and put to work in the harshest of conditions. Before long they are starving and filthy, but it is the confusion and fear they are forced to live with that is most de-humanizing. Who are their gaolers (two men and one woman who give nothing away about where they are or why they are there)? Who engineered it? And why them, in particular?

The latter question is partly answered as they learn each others’ stories. They are the women we meet in the media every day, the ones gang-raped by a footy team, filmed by hidden cameras, who complain about being sexually harassed by their boss, or have an affair with their priest.

Their presence in this outback gaol is perhaps their punishment for speaking out, and the title of the novel a sly reference to women ‘like that’ getting what they deserve.

The central characters – Yolanda and Verla – find strength by deepening their connection to the land (this is where the gutting and butchering come in). As the power shifts from captors to captives, events get more and more surprising.

There is an undertone of fury in this novel that is hard to ignore, but Wood is far too nuanced a writer to produce a mere polemic. The book has patches of writing that are strange and dream-like, others that surprise with deadpan humour.

But, and this is perhaps its starkest contrast with The Heart Goes Last, it is indeed a novel full of visceral and raw emotion. The Natural Way of Things is a wild shriek of a book, deeply disturbing and expertly written. And if you like your endings tied up with a little bow, you’ll be sadly disappointed.

For books that sift through some of the same ideas – how a sex-saturated society affects our psychology, the menace of big corporations getting beyond the law, and themes of violence and power – they couldn’t be more different. Woods takes the ideological bull by the horns and wrestles it to the ground, while Atwood sits in the stands eating popcorn.

But they do share a common message: beware the future, for it will be bleak. By setting their novels in an unnamed and not-too-distant year, Atwood and Wood have taken current trends – economic meltdown, scientific pursuit unbridled by ethics, so-called ‘slut-shaming’ (not my favourite phrase, but all-too-real nevertheless) – and extrapolated. Nothing about their set-ups is impossible. It is all frighteningly contained in our present. This is speculative fiction that is uncomfortably close to home.

All fiction is really ‘what if … ?’. In the case of Wood and Atwood, their conclusions should trouble our consciences. Wood’s book should prompt us to take issue with the subjugation of women wherever we encounter it. The churches have a shameful history of victim-blaming that needs to be overcome with genuine care for exploited women, and condemnation of the individuals and cultures that allow it to proliferate. In the case of Atwood’s novel, it is at heart a tale of haves and have-nots, the fallout of rampant consumerism and greed that we as followers of the Lord Jesus are often too slow to denounce.

Both of these are dark tales; in neither of them does a redemptive note sound. They are a reminder of how deeply entangled in sin our world really is, and how desperately it needs a saviour.

* And in an unsettling footnote, I’ll leave you with the information that Wood was inspired to write her story after hearing about the Hay Institution for Girls, an arm of the Parramatta Girls Home that housed the ten worst offenders in NSW in the 1960s and 70s. The girls were drugged and put on a train to the decommissioned men’s prison in south-western NSW, where they were forced to march, look at the floor, not talk to each other and endure rape and other violence.

“Nothing that happens in my books is anywhere near what happened to those girls,” Charlotte Wood said in an interview with the Sydney Morning Herald.

Not-so-speculative fiction, as it turns out.

2 Halloween – A ‘Treat’ of an Opportunity!

5 What are you waiting for? (Part 1) The Patience of Job

Reading Narnia While the World Burns

Over the next few days we hope to publish a few posts to celebrate the seventieth anniversary of the publication of C.S. Lewis’s classic The Lion the Witch and the...

The Lion, the Wardrobe, and the Emperor’s Hangman