One thousand years after Christ died in Jerusalem, Christian crusaders threw terrified men, women and children off the walls of Jerusalem. And then held a thanksgiving service to God.

During the middle ages, many Christians enthusiastically burned, drowned and killed women they suspected of being witches.

In the 1930’s, many of the German churches enthusiastically welcomed the rise of Hitler. And then stood quietly by as he exterminated millions of Jews.

These are some of the darker facts of Christian history. Facts that Christians would rather be left in the historical closet—but many a modern Atheist proclaims from the proverbial rooftops. But I didn’t hear these facts from Atheists. I heard them from Christians, in a newly released documentary.

These are some of the darker facts of Christian history. But I didn’t hear them from Atheists. I heard them from Christians, in a newly released documentary.

It’s called ‘For the Love of God: Why The Church is Worse and Better Than You Ever Imagined’, from the Christian media company,  The Centre for Public Christianity (CPX). I saw it last week (pre-release), and let me tell you, it is good. It features members of CPX going to various places around the world where Christians have had an impact (for good and for ill), describing in vivid detail what happened, and why.

It’s a timely documentary, well made for a culture that is increasingly suspicious—if not hostile towards—Christianity.

It was released on Monday at many major cinemas.[1] And it’s well worth watching. Here are 4 things I appreciated about the documentary:

1. It’s not (unnecessarily) defensive, but instead owns up to the atrocities committed by Christians.

Let’s face it: there are many skeletons in the Christian closet. Over the last 2000 years, Christians have often been responsible for things that would make us weep in shame.

And so, it’s tempting to bury these things in the sands of history, hoping they will never see the light of day. But they’ve already been revealed. And these darker moments of our past continue to shape the secular view of Christianity. Hiding from the shame of the past is no longer an option. And that’s what this documentary does well. There is no withholding of truth. Without defensiveness, it admits the tragic mistakes and wrongdoing of some of our spiritual ancestors.

And by doing so, it takes the first step in resonating with the growing concern many people have with Christianity, and the Church. Yes, intellectual honesty demands this openness. But this transparency helps build a bridge with a sceptical culture: we can give them a better explanation of why these things happened than the simplistic (and false) ‘Christianity is just bad for the world’. And in so doing, point them to the Source of ultimate goodness. 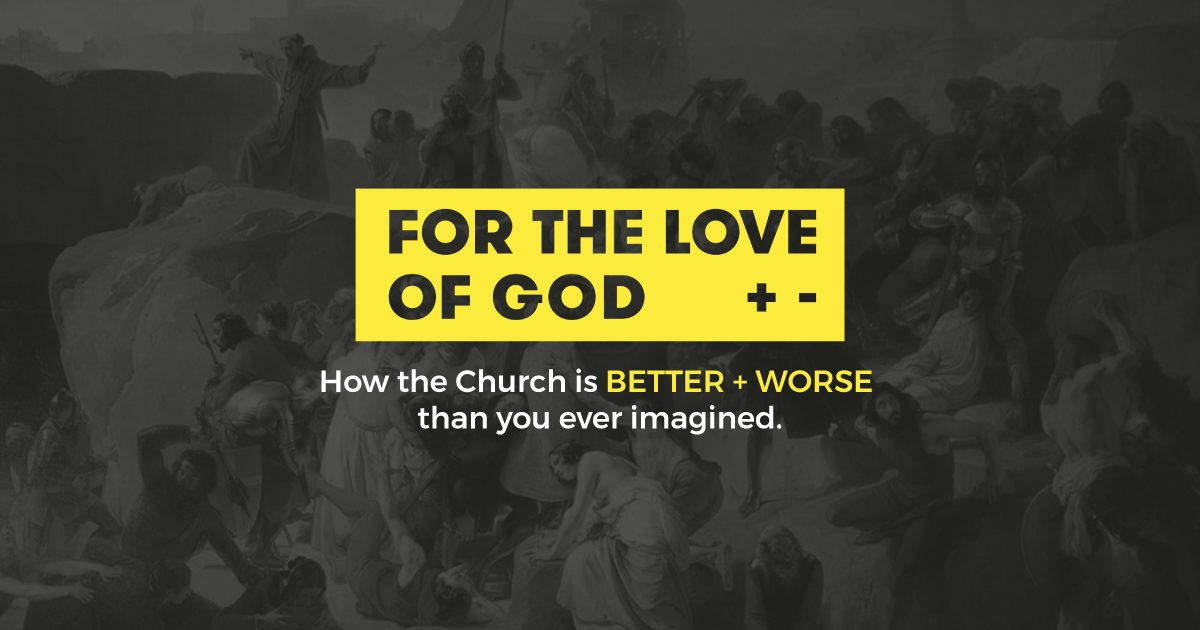 2. It challenges the anti-Christian narrative where it needs to be challenged.

As important as it is to resonate with our secular friend’s concerns about Christian failure, it’s also important to challenge false beliefs.

A prime example raised by the documentary is Northern Ireland. The combatants there were divided along sectarian lines—Catholics on one side, Protestants on the other. So, you’d be forgiven for thinking this was a classic case of ‘religion causes war’.

But a closer look at the conflict shows something different. Yes, the combatants identified themselves religiously—at least in part. But their motivations were not driven by theological concerns, so much as nationalistic ones. They weren’t spilling each other’s blood over a theological disagreement. Rather, they were murdering because of territory: whether to keep Northern Ireland as part of Great Britain or unite it to the Irish Republic. The ‘religion causes war’ narrative doesn’t ultimately fit.

But even more than challenging aspects of the ‘Christianity only causes conflict’ narrative, this movie presents the positive side—a side forgotten (or outright denied) by our secular culture. It’s the amazing story of Christianity’s impact on the world.

3. It gives a more accurate narrative of Christian failings (and why the Church does good things).

Christians have botched things up spectacularly at times. But this isn’t because Christianity—as taught by Jesus and the New Testament—is bad.

It’s because Christians have disobeyed or ignored that clear teaching.

Indeed, as the film points out, Jesus introduced a revolutionary new way—a better way— of understanding humanity, God and reality. Where all people—regardless of age, class, sex or ability—have intrinsic worth that must be respected. This new way of looking at reality laid the foundations of human rights, and so many of the values we take for granted in the West: humility, service and compassion.

When Christians played their master’s tune, the world changed for the better.

4. It is artfully made: filmed on location, telling the stories well, and doesn’t ‘drag on’.

Let’s face it: some documentaries can be overly abstract and boring. But not this one. The information is top notch—they interview some of the top experts in the fields of history, sociology, and theology—but it’s not dry or (merely) academic.

And they take the time to film on location, from Jerusalem to Hawaii. It’s nicely done. It’s interesting. And provocative in the best sense of the word.

Who is the film for?

It’s made for both Christians and non-Christians.

All Christians could benefit from watching this film and learning from our past. As discussed above, the film also: provides Christians an important way of engaging the non-Christian critique; resonates with the critique of Church history; challenges the critique where appropriate; and gives us a better way of understanding the impact of Jesus on our world.

Non-Christians would also benefit from watching the film, although I think the non-Christians who would benefit the most are those who have some interest in this area to begin with (and are open-minded enough to listen to an alternative point of view). It is a documentary after all, not a movie like ‘The Case For Christ‘, so don’t expect the same level of entertainment (although they do their level best to make it interesting!)

Please pray for this film—that it would have big impact on non-Christians, and on the public conversation around Christianity. And be sure to take along non-Christian friend(s) to see it. It’s a film that opens up many opportunities for gospel conversation.

Check out more about the movie at https://fortheloveofgodproject.com/.

[1] You can check out more about where it’s being released at the films website: https://www.publicchristianity.org/documentary-screenings/