For several years now, I have taught a subject of biblical theology in seminaries, in different countries, and also as part of teaching homiletics and missions. So often the Bible overview opens eyes and minds and excites students and preachers.

I was fortunate in that I was introduced, like so many Australians, to Graeme Goldsworthy’s structure of the Bible overview, published in his Gospel and Kingdom—though I learnt of this even before his book was published. Over time, however, I have evolved in how I describe the Bible overview and its structure, and I am not so persuaded that “Kingdom” gets to the heart of the matter. 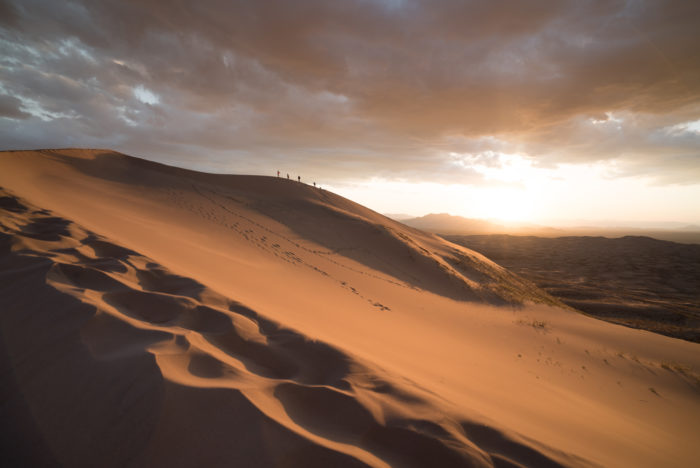 The Lens of Promise

As I have taught and thought, partly influenced by David Clines’ classic The Theme of the Pentateuch, I have come to focus even more on the promises to Abram, which launch the grand redemption plan of God, and are so programmatic to the rest of the Bible. Those promises in Genesis 12:1-7 (repeated later in the stories of the patriarchs) are keys for understanding the Bible.

The Highway of Promise

Incidentally, as I teach preaching, in the topic of preaching Old Testament narrative, I explain the importance of these promises which function like the lanes of a main highway through the Old Testament: descendants, land, blessing, nations. Later, that highway expands with the additional Davidic promises of king and temple. But it seems to me those further promises function within the Abrahamic promise framework rather than as a new era of the biblical story.

Promise to the Nations

In the light of the Abrahamic promise focus, I used to modify Goldsworthy’s “God’s people in God’s place and under God’s rule” slogan with the addition of “for the sake of the nations.” While that addition is not required, in the very first and last versions of the scheme (Eden/new-creation), it’s worth highlighting nonetheless. It is a lost emphasis for many readers, as it was for ancient Israel.

I think this scheme can also do a better job of handling the theme of “blessing.” Goldsworthy’s approach locates blessing as a consequence of faithful obedience to the law—a result of being ‘under God’s rule’. But it strikes me that the connection of blessing to the Abrahamic promises is even more significant, and ought to be clearly emphasised in any biblical overview structure.

Abraham to Malachi: The Era of Redemption

To this end, I have shied away from the separation of the Old Testament into different eras of “kingdom promised,” “kingdom partially fulfilled,” and “kingdom prophesied.” As I see it, the story which stretched from Abraham to Malachi is one big era of the redemption. Though it may be useful to break it into subsections, I remained unconvinced that we are dealing with different eras.

To make this point clearer, I teach the Bible story in six sections:

The “redemption” titles are meant to point towards continuity of the story (rather than a Plan A Old Testament failure and Plan B Jesus schema, which is so common as a misunderstanding of the Bible). These titles also hint at the overlapping eras in the age from Pentecost to the return of Jesus (lived, but also needing to be proclaimed).[1]

Quite recently I have noticed that Chris Green, in his great book Cutting to the Heart (IVP, 2015) suggests another way to modify Goldsworthy’s scheme. He proposes “God’s people in God’s presence and under God’s promise.”

This resonates with me. Apart from its helpful emphasis on promise—which encapsulates law and blessing and thus steers us away from legalism—Green’s use of “presence” rather than place also avoids too high an importance on lands and buildings. This also picks up a theme I had already been developing in my classes.

I think I was first prompted to focus on “presence” rather than kingdom, a few years ago when I discovered Irenaeus’s Bible overview in Scot McKnight’s The Blue Parakeet: Rethinking How You Read the Bible (Zondervan, 2008). Irenaeus’ emphasis, rather than on kingdom, is in effect on relationship and presence. McKnight uses the following titles to explain Irenaeus: Oneness, Otherness, Otherness Expands, One in Christ, Perfectly One. Though Irenaeus only argued for five sections of the Bible story (combining gospels and Acts and epistles in one section, rather than two), his theme struck a chord with me.

Then I read recently the excellent book The Presence of God: Its Place in the Storyline of Scripture and the Story of our Lives by J Ryan Lister (Crossway, 2015). His exposition of the importance of the theme of God’s presence is persuasive and clear. Largely he argues for the priority of the theme of God’s presence with his people as the key theme for the Bible story.

What I find is that the major steps in that theme cohere with a six-part structure of the Bible story. We could state these as follows:

Section 1: God is perfectly present with his people in Eden and the good creation.

Section 2: Sin separates people from the presence of God, seen in the man and woman’s banishment from Eden and the cherubic guards placed at its gate to prevent re-entry.

Section 3: God takes the initiative to dwell in the midst of his people within the tabernacle/temple. While God is present at Sinai, for example, and through the wilderness, the aim of this is his ongoing presence, though with some distance, in the Most Holy Place of the tabernacle.

Section 4: God takes a step closer in being present with his people in the incarnation. So the limitations of God’s presence in the Abraham – Malachi part of the Bible find a step forward, a step towards closer relationship and presence, in the tabernacling presence of Jesus incarnate.

Section 5: God is more closely present with his people by his Spirit who dwells not behind curtains, not incarnate but internally, within people who have a relationship with God.

Section 6: Finally, as in the beginning, God is perfectly present with his people in the new creation, in which there is no longer need for a temple building. These steps seems to me each to be significant and marking each of the six biblical eras in the structure of the biblical story.

I raise all this, not as a definitive schema, but to stimulate thinking on how best to understand and explain the great Bible story.

[1] This was adapted from C Bartholomew and M Goheen, The Drama of Scripture [SPCK, 2004].) These six sections are also similarly found in Chris Wright, Sweeter than Honey (Langham, 2015)

Paul Barker is an Assistant Bishop in the Anglican Diocese of Melbourne. Until 2016 he was Regional Coordinator for Asia for Langham Preaching, a Visiting Lecturer at Myanmar Evangelical Graduate School of Theology and taught in a variety of other Asian seminaries. He is the author of The Triumph of Grace in Deuteronomy, a book of expositions on Amos and other articles and short books. Formerly he was Senior Minister of Holy Trinity Anglican Church Doncaster, Melbourne.

5 1 Corinthians 5: Why it is Necessary and Loving Not to Associate or Eat with Certain ‘Christians’

The Apostles’ Creed (7): He Descended into Hell