Joseph Prince is a charismatic pastor of a very large church in Singapore. He has written a number of popular books, but it is his emphasis on what is called ‘hypergrace’ that is raising quite a deal of discussion in Asia. His key book is entitled Destined to Reign: The secret to effortless success, wholeness and victorious living. This review seeks to engage with his theology of hypergrace (though the term is not used in that book). 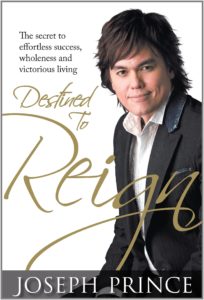 Without a doubt, the emphasis of Prince on grace is healthy. The gospel of Jesus, the heart of Christianity, is one of grace: we are saved totally by grace—a free gift of God in the death of his Son on the cross for our redemption. It is God who has qualified us for the inheritance of the saints in light (Colossians 1:13). It is by grace he has saved us through faith; it is a gift (Ephesians 2:8).

Many Christians do not grasp grace properly. Humanity’s default position is to try to merit something by our works or piety. And Prince is right to stress the way the gospel of grace sets us free from these attempts to please God by our own effort.

However, there are several serious theological weaknesses in this book that make it dangerous.

The most serious and troubling weakness of his view of the Old Testament is his handling of the law. For him the law is a bad thing, an enslaving thing, because it is synonymous with legalism. The law is a path to salvation through good works that can never succeed. He comments that the law is all about YOU (38f) and ‘the law is all about looking at yourself’ (196)

Yet the law begins with a statement of grace, namely that Yahweh is the God who brought Israel out from Egypt. The law is a response to that grace, not a means of winning it. Further, several laws are expressions of imitations of Yahweh (e.g. treat slaves and aliens well because God rescued you from slavery and you were aliens in Egypt; judge impartially because God judges impartially). Many laws reflect the perfect character of God: love your neighbour; serve the Lord; love God. The law is not simply about YOU at all!

Prince also fails to see the nuances of understanding the law in the Bible. The Old Testament itself declares the law to be good, delighting the soul (Ps 19:7). The law includes the sacrificial and ritual systems which provide a way to be in relationship with God through faith—and not trusting in one’s own obedience.

The Old Testament—like the New Testament—knows that the law does not empower law-keeping. It looks forward to a circumcision of the heart (Deuteronomy 30:1-6).

By exposing our sin, it shows us our need of Jesus, and his sacrifice to provide forgiveness.

Yet Prince (wrongly) claims we must not preach the Ten Commandments because they kill (121), and will lead believers to sickness and depression! Really? When Moses preached them in Deuteronomy, the next we hear of Israel is their faithful obedience to conquer the land! Prince sounds like the second-century heretic Marcion, who disdained the Old Testament—and never more than when he turns 2 Timothy 2:15 (“rightly dividing the word of truth”) into a call to separate (divide) the old and new covenant (51). This is appalling exegesis.

The subtitle of Prince’s book suggests that the Christian life is to be ‘effortless’. That idea may be appealing to hard-working Singaporeans, but it is not biblical. Prince turns a blind eye to the frequent New Testament encouragements to striving, struggling, completing the race, straining to the finish line, and so on. When he discusses 2 Peter 1 (God has given us everything necessary for godliness) he deliberately omits the part where Peter tells Christians to “make every effort” (102). For Prince, effort is a contradiction of grace. But this is simplistic and selective.

Prince claims that if you are under grace, then you do not live in sin (he does not quite claim Christians are sinless, but he never explores this issue). He refers selectively to Romans 6, but fails to see that Paul thinks believers might continue in paths and lives of sin, and so need to be warned: “let not sin reign in your mortal body.” (Rom 6:12)

One of Prince’s striking claims is his call not to confess our sins. Here is a mixture of truth and error. On the one hand, it is true the blood of Jesus covers all our sins, past, present and future. On the other hand, the Bible calls God’s people to repent, to turn from sin, and to confess. The Bible does not suggest that we are forgiven because of our own work of confession—we don’t have to remember every sin, or live in fear of unforgiveness if we forget one (despite Prince’s caricature)—yet Scripture does encourage us to respond to God’s forgiveness with confession and repentance (see, for example, Revelation 2-3). Confession remains a good and humbling practice for those who know they have been forgiven.

Use of the Bible

Prince often boasts he reads the Bible in its context, but when it suits him, he ignores it, as in 2 Peter 1 above. Generally he highlights Paul’s comments on grace, but not the good works and morality that are to follow. While he is right to say if we appropriate grace correctly, it will not lead us into sin, he fails to see that commands and laws help guide us away from sin. If Prince were right that we make no effort and need no law, then significant portions of the epistles would be irrelevant.

Prince’s attempts to evade such passages sometimes cause him to adopt dubious interpretations. Some are offered without any evidence; others are just flat-out wrong. For example:

The style of Prince’s book is also concerning. From time to time he parades what he claims is revelations from God. Yet he systematically ignores passages that do not fit his understanding.

He is also not shy of claiming he is no fool—reminding us of times God has used him to great effect and telling us about his worldwide ministry. His illustrations mostly commend himself in some way. His book cover is a portrait of himself. While Prince’s theology claims to be God-focussed, it is hard to avoid the concern that the book centres a bit too much on Prince himself.

Prince’s general worldview is Christians will be successful. That is clear in his subtitle and opening chapter: “If you are a businessman, God wants you to have a prosperous business.” (1) Such a prosperity gospel framework (21, 23 also) is itself far from biblical. Where is the call to suffer and be persecuted for the gospel’s sake? Where is the call to imitate Jesus and take up your cross? Such an insidious worldview is popular because it plays on human greed—but it is far from biblical. It is part of the deception of this book.

Prince strays towards what Bonhoeffer called ‘cheap grace’: grace that comes without a genuine call to discipleship. Although he rejects that charge, and says anyone embracing grace properly will not desire to sin (a fair comment), his lack of interest in, or comment on, the New Testament’s ethical demands speaks otherwise.

Prince sets himself up as an astute interpreter of the Bible, but he is far from it. He is simplistic, selective, deceptive and shows ignorance of nuance, balance and complexity. His argument rightly directs us to grace and Jesus but wrongly interprets it, and thus endangers his readers.

Paul Barker is an Assistant Bishop in the Anglican Diocese of Melbourne. Until 2016 he was Regional Coordinator for Asia for Langham Preaching, a Visiting Lecturer at Myanmar Evangelical Graduate School of Theology and taught in a variety of other Asian seminaries. He is the author of The Triumph of Grace in Deuteronomy, a book of expositions on Amos and other articles and short books. Formerly he was Senior Minister of Holy Trinity Anglican Church Doncaster, Melbourne.

I was speaking to a friend the other day. He is not a pastor; he is an itinerant preacher and teacher. All his time is simply taken up with teaching...