What is irrational about me getting exactly what I want from every one of you whenever I want it?

Modern Atheism has a problem.

At least according to a Professor of Psychology at Toronto University, named Jordan Peterson.

No, it’s not that Atheists are any more or less prone to psychological distress than religious people. Instead, it’s got to do with the popular view among Atheists (especially among the New Atheists) about the God-like power of human reason. 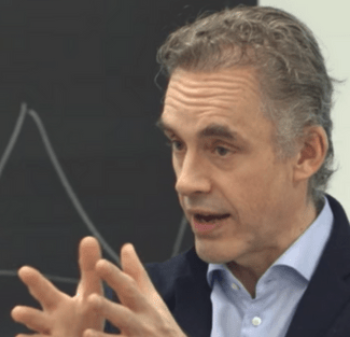 1) Many Atheists Believe That Doing Evil Is Irrational. And Doing Good Is Rational

So human reason alone can show us morality: no God required.

According to many Atheists I’ve encountered, anyone thinking rationally will know what good is, and do it. Doing evil, on the other hand – such as being selfish, and cheating on others – is irrational – it doesn’t make sense.

In which case we don’t need religion of any kind to tell us what right and wrong is – it’s just self-evident.

But there’s a problem with this logic.

2) When Selfish Behaviour is Rational

Psych Professor Jordan Peterson nails the problem with modern Atheism when he says:

What is irrational about me getting exactly what I want from every one of you whenever I want it at every possible second?…There’s nothing irrational about it. It’s pure naked self-interest.

Why not every man for himself and the devil take the hindmost? It’s a perfectly coherent philosophy, and it’s actually one that you can institute in the world with a fair bit of material success if you want to do it.’

It’s an interesting point. And it’s relatively easy to find real life cases of this principle.

For example, is cheating on an exam the wrong thing to do? I know both Christians and Atheists would say ‘yes’. [1]

But now answer this: is it rational or irrational to cheat on a test?

The answer is not so obvious. After all, if you can cheat on a test, and get away with it, and it means the difference between getting that great job, or that mark needed to gain entry to that prestigious university, cheating on a test may well be ‘reasonable’ (Suits, anyone?)

The same could be said for that lucrative business deal: why not bend the rules, if it means you end up with thousands more in your pocket? If you’re in an unhappy marriage, why not indulge in that marital affair, if you’re sure you can get away with it?   (Evidently millions of married people think this way: a company by the name of AshleyMadison.com have made a business out of marital infidelity.)

In sum, if the benefits of doing something illegal/immoral outweigh the risks of being caught, why not do it? It’s a rational calculation.

Not only can selfishness – and other forms of evil – be rational (certainly in an Atheistic Universe); doing good can be irrational.

3) When Acts of Virtue are Irrational

There are many possible situations where doing good can be considered irrational. Jewish social commentator Dennis Prager gives the following  historical example that makes the point:

Was it rational or irrational for a non-Jew in Nazi-occupied Europe during World War II to risk his or her life to hide a Jew? We all know that this was moral greatness of the highest order. But was it rational?

Not really. You can’t get much more rational than self-preservation. Moreover, in all the studies I have read of non-Jewish rescuers of Jews during the Holocaust — and I have read many — I have never read of any rescuers who said that they did what they did because it was the reasonable or rational thing to do. Not one.

It can be rational to cheat on a test, a business deal, or a marriage, if the rewards outweigh the risk of being caught. And it was irrational of non-Jews to put their own lives at enormous risk for the sake of helping Jews during the Holocaust.

And so here, in a nutshell, is the problem for Atheism:

4) If Doing Evil Can Be Rational, and Doing Good Can Be Irrational, Then Human Reason Alone Can’t Tell Us Right From Wrong.

This is because Reason is just a tool. It is no more intrinsically moral than a knife.  A knife can be used to murder or to torture people. But in the hands of a surgeon, it can be used to save lives.

And so, contrary to popular Atheist views, human reason alone won’t be able to guide individuals or society to work out what is right, and what is wrong.

So if it wasn’t reason alone that gave us the western view of human rights, human equality, and human dignity, then where did such a view of humanity come from?

But Through the Religion of Judeo-Christianity.

This is an issue I’ve written about before, but it’s refreshing to hear a secular Psychologist like Jordan Peterson make the same case:

[T]he proposition that underlies western culture, is that there’s a transcendent morality… the ethic that drives our culture is predicated on the idea of God.’

It’s the idea that we’re made in the image of God, with inherent worth, dignity, and equality. In the words of Atheist philosopher Luc Ferry:

Christianity was to introduce the notion that humanity was fundamentally identical, that men were equal in dignity – an unprecedented idea at the time, and one to which our world owes its entire democratic inheritance.’

Now, I’m not saying all Atheists are egotistical and self seeking – many Atheists are noble, virtuous people (and many Christians do awful things!). I’m merely saying that Atheists are misguided in believing that reason alone is a reliable guide to morality.

Why We Need Reason + Revelation

It’s nice that a secular psychologist like Peterson understands the problem with human reason. And from the Bible’s perspective, although human beings in general have some sense of morality (due to our being made in God’s image), our moral compass is far from perfect, and easily warped by our sinful desires, our culture, and other influences (e.g. Romans 1:18-32) .

Hence we need a word from outside ourselves to show us what right and wrong is. But more than that: we need Someone to rescue us from ourselves, renew our hearts, and give us a new moral compass – one that actually functions (albeit not without effort).

Thanks be to God for Jesus Christ, in providing that new heart.

[1], [2] I’m indebted to Dennis Prager for the examples in this section – see his video on this issue.

He is married to Sarah, with three children.
Akos was born in Budapest, and was blessed to be able to come to Australia as a refugee in 1981. He came to faith in late highschool, through the influence of friends, family, and school Scripture. He went on to study Aerospace Engineering at UNSW, before working in the RAAF for five years. After completing his B. Div. from Moore Theological college, he then had the joy of serving with AFES for six years, at Southern Cross University in Lismore.

2 Three Bookmarks and a Bible

5 4 Considerations for Christians Wanting to Engage in Political Activism

Dear Pastor, Struggling To Grow Your Church? This May Help.

Training Preachers in the Local Church

Your Year Ahead in Books