The Thor films are actually the best of Marvel’s solo outings and tracing the arc through this trilogy is fascinating.

The hammer of the gods

To fight the horde,
and sing and cry
Valhalla,
I am coming!

On we sweep with threshing oar

Our only goal will be the western shore

So I’m watching Thor: Ragnarok. On Thursday no less.

Five minutes in, the Asgardian God of Thunder is battling the demon harbinger of the apocalypse as Led Zeppelin’s Immigrant Song shreds in approval. Ancient Norse mythology meets Marvel Cinematic Universe through rock and synth and fire and lightning. Hollywood’s biblical epics could learn a thing or two . . . about how to be totally rad!

Seventeen films into this franchise (canonical notation: phase 3, film 5), bringing in director Taika Waititi is a stroke of brilliance. See, my contrarian view—against popular and critical opinion—is that the Thor films are actually the best of Marvel’s solo outings and tracing the arc through this trilogy is fascinating.

After the strong reception of Iron Man, the next two instalments (The Incredible Hulk, Iron Man 2) both received a tepid response. Thor (2011) was widely regarded as make or break point in Marvel’s cinematic ventures. But how to succeed? Conventional wisdom in the early days of our superhero cinematic deluge suggested that audiences would only accept films based on “childish” comic books if you grounded them in “grown-up” reality.[1] A difficult prospect for a superhero who flies around by spinning a magic hammer and travels between worlds on a bridge made of rainbows.

Marvel’s solution was to go Shakespearean. Write Thor as a story of cosmic royalty – a story of kings and princes rooted made familiar through the cinematic language of the period dramas we were forced to watch in high school. And who better to direct than British thespian Kenneth Branagh – Henry V (1989), Hamlet (1996) . . . now Thor (2011).

Branagh created Thor as a fraternal tragedy, tackling big questions of birthright, envy and true virtue—“whosoever holds this hammer, if he be worthy, shall possess the power of Thor” whispers Odin as he banishes his eldest son from Asgard.

But this franchise that began as Shakespearean history and tragedy, has now transformed into comedy. Of course the tracks towards this were already being laid in previous outtings. Most notably this scene from Avengers (2012):

Thor: You have no idea what you are dealing with!
Iron Man: Shakespeare in the Park? “Doth mother know you weareth her drapes?”

In the hands of New Zealand comedy director Waititi, these side jokes about the overwrought nature of Asgardian conversation are lampooned for comedy gold, but also reveal surprising dramatic effect. 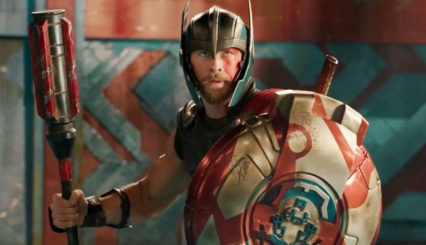 Shakespeare in the Park

Thor: Ragnarok exposes the Shakespearean melodrama for what it is—a family squabble between two entitled rich kids; Asgardians as Kardashians. Sure, Thor: Ragnarok brings the laughs, but it does so by recognising that these so called gods are merely brothers bickering about who daddy loves more. As one character notes: I don’t want to get involved, that sounds like a family issue. So by acknowledging the “melodrama”, Waititi reveals the human drama behind these relationships. By undercutting pretentiousness, he makes space for authenticity.

Waititi has referred to the heart of this film being a scene where Thor and Hulk are found simply sitting, eating and talking it out with each other; their legs dangling over the edge of a bed. “When you look at comic book characters, we don’t have anything in common with them,” he says, “especially not Rich Kid Space Viking or Bipolar Angry Green Beast. So you’ve got to bring them into situations that all of us have been in.”[2]

Waititi has explored this approach in his previous work—his mockumentary What We Do In The Shadows follows four vampires through their everyday challenges—as housemates splitting up chores; the centenarians struggling to keep up with modern fashion (especially when you cast no reflection). Through common shared struggles Waititi reveals the genuine friendship built upon everyday living together.

Here, instead of everyday vampires we find everyday “gods.” The Incredible Hulk and the Mighty Thor, muscle bound and larger than life, just finding their way through a hard conversation. Two guys trying to communicate their feeling and insecurities—one at war within himself, the other an outsider from a dysfunctional family—“we’re just the same you and I” says Thor, “just a couple of hot headed fools.” And like that, they move from “friends from work” to genuine friends.

The first chapter of the gospel of John opens with a cosmic mural of darkness and light and word and flesh (John 1:1-18). The Christian message is big—Jesus was there at the beginning; all things were created by him; in Jesus, there is life.

This is serious stuff, and those who believe and have received Jesus into our lives cannot help but treat this God with the reverence, worship and awe we believe he warrants. We have seen his glory and cannot help but want to know him better, love him more, and care for his creation. With some minor tweaks to the lyrics, the opening to the Immigrant Song (above) would sometimes describe our own desire to make God known amongst the nations.

But the remaining twenty chapters of John follows the story of a man, a human being—Jesus, the Christ. The incredible God of chapter 1 brought himself into the situations that all of us have been in. A mighty God who became a human being, to live and walk and talk with us. A man who ate and drank and slept.[3] He worked a job. One time Jesus got so angry he tipped over a table.

This man is not some demigod, high above mere mortals. He is not someone with whom we have nothing in common, but was fully human like us. He suffered when he was tempted. He can empathise with our weaknesses. And when he walked this earth 2000 years ago his priority was to sit, eat, and talk it out with the prostitutes and tax collectors and unclean outcasts. The political or social influencers mocked him—“friend of sinners” they called him.

Do they still call Christians that today? Are we known more for pretentiousness, or authenticity?

We Christians believe in a God who lived to die. Who became one of us to bring us back to him. We who were at war within ourselves, we who were outsiders from dysfunctional families—he called us into his church. Not the gold-gilded buildings filled with murals, nor the institutional seat of power. No, the church is not a place, but a people. An everyday people, joined together by an everyday God.

[1] In the DC comics cineverse, Christopher Nolan had just completed the second film of his Dark Knight trilogy. In the Marvel vs DC stakes, 2011 was a different world compared to where we find ourselves today…

[3] With presumably the same daily after effects we experience from eating and drinking. It is helpful to be reminded how scandalous such a claim is. For many the idea of a God become flesh – and all that that entails – amounts to high blasphemy.

David works bivocationally for City Bible Forum Melbourne and as an IT Consultant . He completed his MDiv with Ridley College with his final research project presenting a Christian Anthropology for Machine Augmented Intelligence. He serves at Holy Trinity Doncaster with his wife and three young kids, whom he hopes will one day also be giant geeks.