The pre-programmed protagonists find meaning in that most traditional (indeed Christian) reality—love.

Potential Spoilers! While this article deals mostly with the themes of Blade Runner 2049 there are references to non-crucial plot elements of the films. Also major spoilers for the original 1982 Blade Runner.

Blade Runner fans, exhale in relief. Thirty-five years after the Ridley Scott original defined dystopian sci-fi for modern cinema, its sequel Blade Runner 2049 somehow stands shoulder-to-shoulder with its seminal forebear. No, director Dennis Villeneuve (Arrival, Sicario) climbs upon those shoulders. He remixes and expands the world-building and future-noir stylings of Scott’s original vision, filtering them through the grace and nuance displayed in recent works.

Everyone involved in this production is at the top of their game. The Hans Zimmer/Benjamin Wallfisch score is immense; the visuals spill beyond the original’s rain and neon cityscapes into the bone-white outer LA wastelands, and a rust-orange post-fallout Las Vegas (Roger Deakins, surely your Oscar time has arrived). Harrison Ford re-embodies a grumpier version of the grizzled archetype that he invented. Ryan Gosling, playing Blader Runner KD9-3.7 (“K”), does his best Ryan Gosling face; first seen in his work on Drive, this yearning-melancholy-behind-an-emotionless-facade seems custom built to play a replicant searching for a soul (that’s a compliment). K’s AI companion Joi, played by relative newcomer Ana de Armas, carries the greatest emotional punch of the film, while Robin Wright continues her habit of commanding every scene she is in. Even Jared Leto’s method acting is … not too distracting.

Like its predecessor, this film will divide audiences – for some it is a masterwork of auteur philosophy, for others it’s dull and a little bit full of itself really. For me, Blade Runner 2049 ranks amongst the best science fiction films of the past decade—and I’m one of “those” people who maintain there is a difference between “fantasy” and “science fiction” (Star Wars is not science fiction—ask me about that one day. It’s pleasant.)

While honouring the original (Atari and Pan-Am survived in this world), Blade Runner 2049 also updates its projections for 21st century technological trajectories. The iconic nighttime opening of an dirty city line awash with flames, is replaced here by a daylight wasteland of aged solar farms. Skyscraper video advertisements have been upgraded to be three-dimensional and consumer-aware; and remote voice commanded autonomous drones fill the sky. Flying cars are old tech.

So too the central themes and questions at the heart of the Blade Runner have evolved since 1982. Questions of identity and reality have shifted.

In 2017 the existential question “can a machine be human?” can seem old hat. From James Cameron’s Terminator to Alex Garland’s Ex Machima, from HBO’s Westworld to Netflix’s Black Mirror; the question has been asked and even satirised.[1]

Many might even argue that emergent technologies are propelling such questions from the realm of speculation into practical questions of engineering and law. Neuroscience acknowledges no soul. Human consciousness is merely an emergent abstraction from biochemical brain activity.[2] In 1982, science fiction asked “can a machine be human?” In 2017 science posits that humans are but biological machines.

Blade Runner 2049 honours the questions of humanity of the first film while shifting these themes to address the new existential question for our times. In Villeneuve’s contemporary sequel the characters no longer ask what it is to be “human,” but what it means to be “real.”

Where the chief enigma of Blade Runner revolved around whether or not Deckard is human or synthetic, Blade Runner 2049 does not equivocate—KD9-3.7 is a replicant; and he knows it. But can a machine, a replicant, still find something “real”? Even within his programmed parameters can there be genuine identity, agency and purpose? 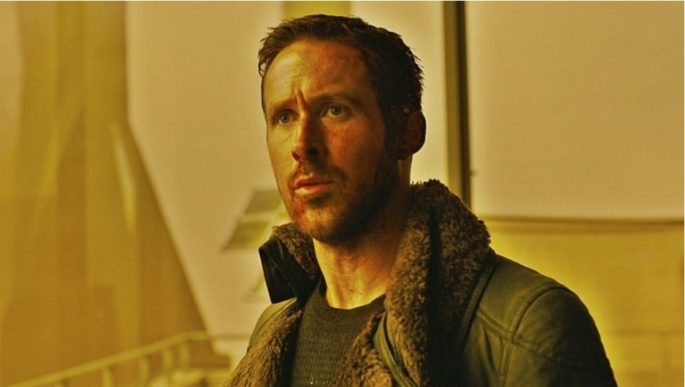 Because, if so, maybe we humans can find real meaning too, despite being ultimately nothing more than just machines ourselves. When K notes that he has no soul, another character quips “you’ve been getting on fine without one.”

The theme for the 2018 Global Atheist Convention (to be held in my hometown Melbourne, Australia) is “Reason to Hope”.* It represents a rising tide of modern atheism that pushes back against the perspective that a purely naturalistic worldview is intrinsically without meaning.[3] We can see that same spirit in Blade Runner 2049: If K can find an identity, agency and purpose even amidst his programming,[4] then surely there is meaning to be found for replicant and human alike. Even within biological determinism, perhaps there’s still a reason to hope?

Leaning into such themes, Villeneueve reserves the deepest meaning for his synthetic characters. The pre-programmed protagonists find meaning in that most traditional (indeed Christian) reality—love. Love is the “miracle” that makes one replicant fearless in the face of death; love forms the final words of another.

Of course, much can be affirmed here. Love is central to the Christian faith and is similarly upheld over and above the “worldy” pursuits of the film’s human characters—from the hedonistic consumption of fabricated foods and fabricated sex, to the Ozymandian desires of the chief antagonist.

Yet the bigger question worth engaging for this film is whether a meaning derived from within a synthetic framework is sufficient. Meaning may be “real” within naturalistic boundaries, but is it “enough” of a reason to truly hope? Doubtless, in Villeneueve’s sequel we find incredible beauty. Yet it is beauty of rust and radiation.

The author of the book of Ecclesiastes tells it like this:

I have seen the burden God has laid on the human race. He has made everything beautiful in its time. He has also set eternity in the human heart (Ecclesiastes 3:10-11)

That ancient writer uncovers many real and worthwhile things in life—good food and wine, the gaining of wisdom, spouses and children, making good work, gaining power and wealth and being generous with the same. Yet he also discovers that all of them are limited and insufficient. None of them satisfy the desire for ultimate meaning that comes from the eternity in his heart. I suspect that even amidst our rising secularism, there remain many who are similarly haunted by feelings that there may be something more than this.

Perhaps Blade Runner 2049 can provide us with opportunities to have conversations about that haunting.

* Postscript: Since the publication of this article, the Global Atheist Convention “Reason for Hope”  referenced in this article has been cancelled due to insufficient ticket sales.

[1] For example in a throwaway scene in Rick and Morty season 1, episode 9 (“Something Ricked this Way Comes”) Rick creates a sentient robot. Robot: What is my purpose? Rick: You pass butter. Queue existential cry.

[3] In the world of film, Werner Herzog has your back—“the universe … is chaos, hostility and murder.”

[4] And, to be clear, in this film (unlike with so many Disney princesses) hope is not discovered by breaking beyond one’s programming, but is discovered even from and within any synthetic memories and pre-determined goals.

David works bivocationally for City Bible Forum Melbourne and as an IT Consultant . He completed his MDiv with Ridley College with his final research project presenting a Christian Anthropology for Machine Augmented Intelligence. He serves at Holy Trinity Doncaster with his wife and three young kids, whom he hopes will one day also be giant geeks.