This collection of 366 readings is a mostly chronological covering of women of faith from Mary, the mother of Jesus, to the present day. Severance has sorted and collated a massive amount of historical material, and made each reading one page of basic information about the woman and how her faith in Christ played out in her life.

I did indeed read one per day for a year, and I found it to be an encouragement and challenge to consider how other women have lived in various times and places and circumstances, remaining faithful to the Lord.

If a collection is made of women of faith, you can tend to pick the women who will be there: Sarah Edwards, Hannah More, Monica (mother of Augustine), Susanna Wesley and Joni Eareckson Tada. So most collections cover the same women again and again. All are great to learn about, but the advantage of this collection is the breadth of women included. Even if you are reasonably well versed in biographies of Christian women, chances are there will be hundreds here you have never heard of. 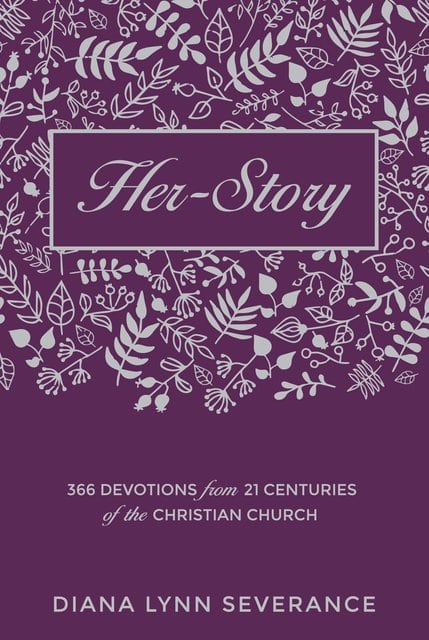 Her-Story: 366 Devotions from 21 Centuries of the Christian Church

Her-Story: 366 Devotions from 21 Centuries of the Christian Church

The early readings about women of antiquity and the Middle Ages were so encouraging: women who were queens, or faithful mothers, or early authors. Of course, there is less information for these ages, so by February you are into the Reformation and that becomes harder reading, with numerous accounts of persecution and martyrdom. We are into the 1800s by July and well into the 1900s by October. Only a handful of women included are still alive.

It was an encouraging way to spend a year, learning more about faithful women from over two millennia. There is a joy to see people who have chosen to live for Christ in every age and this is a wonderful example for us to follow. At the same time, because each account was so brief, and much of it presented in a measured, factual way, it felt like a surface treatment. Many truly tragic circumstances were presented so baldly that it didn’t give you a chance to fully appreciate the gravity of what was being described. I would have loved more details for many. For those who would like to delve further into historical writing covering more details of some women, you could try Severance’s other work, Feminine Threads: Women in the Tapestry of Christian History.

There wasn’t enough time to analyse real faults and failings, many were presented with an awkward sort of perfection, and so increasingly they set a standard that many women would struggle to emulate. Many of the women of the reformation onwards were highly educated, very pious, spoke numerous languages, translated the bible and still had families, which could well leave the modern woman thinking: how is that even possible?

It is true that numerous women who struggled with ill health and hard circumstances were included, but the challenges of sin and maintaining godly living weren’t really present. I didn’t get the sense that these women struggled with the same sins I do.

I imagine that collating any list of women of faith over that time would require limits. So, I was surprised some women warranted two entries, for example Queen Elizabeth I, Florence Nightingale and Sarah Edwards, yet some were obviously missed out such as Queen Elizabeth II or perhaps Nancy Guthrie. I wonder whether permission was needed to include women who are still alive, because I suspect more could be found for the current ages. It also felt like a very Europe and America centred list. Few women from Asia or Africa rated a mention, I think there was one Pacific Islander and one woman who was born in Australia.

The final month or so were mainly missionaries, which is a great encouragement. However, surely there are also many faithful women living in the 20-21st centuries who did not end up on the mission field? It felt a little unbalanced. Admittedly, these are the women that are known and able to be researched, rather than your average faithful Christian woman known only in her local context.

One of the real blessings for me was the collection of hymns and poems that were included, written by various women over the ages. I now have a list of these written out for my own encouragement and for use in prayer. I feel heavily indebted to anyone who can express the truths of the gospel in poetic form, something that I feel ill-equipped to even try. That has been one of the benefits for me personally.

In summary, it’s an encouraging book that reminds us that women, and of course men, have carried their crosses for Christ, in faith, from his death and ascension for two thousand years to today. We can read and be encouraged, as well as educated and inspired by those who have come before us. But we should also read with a sense of reality: these are mere snippets of information and represent each woman only in part. If you want to find women to truly emulate and model your life on, find a godly Christian woman in your context, talk to her, and get to know her story.