In Dr Seuss’ Happy Birthday to You, he asks:

If you’d never been born, well then what would you be?
You might be a fish! Or a toad in a tree!
…
Or worse than all that…Why, you might be a WASN’T!
A Wasn’t has no fun at all. No, he doesn’t.
A Wasn’t just isn’t. He just isn’t present.
But you…You ARE YOU! And, now isn’t that pleasant!
Today you are you! That is truer than true!
There is no one alive who is you-er than you!

More than sixty years later, ‘you being you’ is no longer quite so pleasant. For many, it’s the cause of confusion, anxiety, and perhaps a touch of shame.

Of course, ‘Who am I?’ is not a new question, neither is the struggle for identity a novel endeavour.

What seems to be novel is both the pervasiveness of the question and the places we look to find our answer. An identity crisis that used to be a rare occurrence is now becoming just another Tuesday. And the most authoritative and trustworthy place we can go to find the answer is by looking inward: ‘to thine own self be true’ is the name of the modern game. But where did this answer come from? Is it working? And is there another way forward? 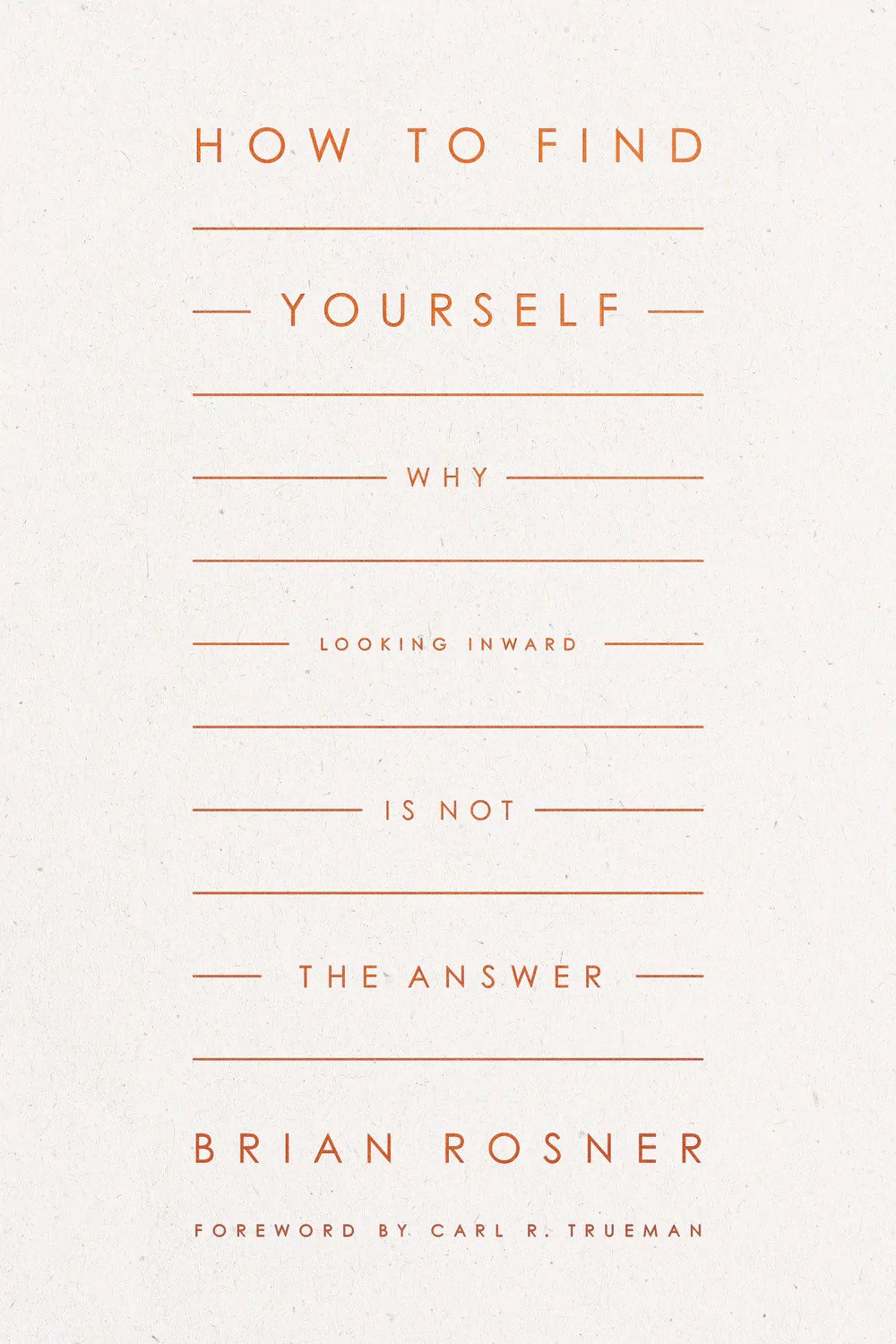 How to Find Yourself: Why Looking Inward Is Not the Answer

How to Find Yourself: Why Looking Inward Is Not the Answer

In the 21st-century West, identity is everything. Never has it been more important, culturally speaking, to know who you are and remain true to yourself.

Prompted by his own past crisis of identity, Brian Rosner challenges the status quo by arguing that, while knowing yourself is of some value, it cannot be the sole basis for one’s identity. He provides an approach to identity formation that leads to a more stable and satisfying sense of self. This approach looks outward to others—acknowledging that we are social beings—and looks upward to God to find a self who is intimately known and loved by him. How to Find Yourself equips readers to engage sympathetically with some of the most pressing questions of our day.

‘to thine own self be true’ … But where did this answer come from? Is it working? And is there another way forward?

In How to Find Yourself, Brian Rosner faces this collective cultural identity crisis with empathy, clarity, nuance, and brevity.

His book has three key movements: (1) Investigating the current solution of looking within and sketching how we got here; its benefits; and whether it’s working; (2) considering other sources for identity formation; their benefits and drawbacks; and whether they could work; and (3) presenting the gospel story as a better way to find and be yourself.

In this review I’m not planning on rehearsing the argument Rosner unpacks. Instead I want to outline four reasons I think this book is so helpful and worth being read by a wide audience—the faithful believer and interested sceptic; those well-versed in this topic and those who’ve read nothing; those in paid or unpaid ministry.

The issues surrounding identity are high-stakes and deeply personal. It’s easy for the tone and tenor of the conversation to quickly become harsh and combative—almost dismissive—with both sides wailing at the other for how wrong and misguided they are.

But Rosner doesn’t approach the issue that way. There’s nothing scornful in the way he discusses these issues, the people struggling with them, or the broader societal forces that may have had a hand in shaping them. He’s not dismissive when it comes to self-expression (known academically as ‘expressive individualism’), assuming instead there must be something good and attractive in it for so many people to jump on board.

Rosner is a fellow traveller. He’s empathetic, understanding, and kind. And his honesty and vulnerability is one of the key strengths of this book. He gets it. The struggle is real.

Rosner is a fellow traveller. He’s empathetic, understanding, and kind.

Although the topic of identity is complex and often-philosophical, How to Find Yourself speaks with simplicity without being simplistic. This is no easy feat, but Rosner avoids both potential pitfalls, instead charting a course of clear, thoughtful, generous, and hope-filled insight.

It’s hard enough to feel totally satisfied when I choose my own biscuit from Arnott’s Assorted Creams, let alone being satisfied with determining my entire fundamental identity. It’s hard enough to choose between a Monte Carlo and a Kingston. Heaven forbid I accidently pick up an Orange Slice! When those mistakes happen there’s no one to blame but yourself, you idiot!

When that dynamic plays out in the arena of fundamental identity, it’s easy to agree with Rosner that expressive individualism is, at least partly, a factor in rising rates of anxiety, isolation, and narcissism.

Rosner wants to show that the Christian story does everything modern expressive individualism attempts—but better and with less unfortunate side-effects. He ends where you might expect him to: the centre is God himself. He is the one who ultimately defines our identity and shapes the story we’re living in.

Rosner wants to show that the Christian story does everything modern expressive individualism attempts—but better and with less unfortunate side-effects.

How to Find Yourself is not dense or laborious to read. It’s not overly intellectual or esoteric. Even for those among us who don’t do much reading, this book is eminently readable. And it’s readable whether you’re inside or outside the Christian faith.

The first three parts of the book are helpful and interesting, and on their own would warrant its space on the bookshelf. But in Part 4 Rosner moves from describing the problem and how we got here to providing a way forward.

This conclusion is the highpoint of the book in every way. For me it was this final part where How to Find Yourself turns from being a very-helpful addition to a must-read.

One of the disappointments I feel with other discussion on this identity issue is it’s often reductionistic. In wanting to press the importance of finding our identity in Christ (which I’m on board with) the rhetoric over-corrects, pitting ‘identity in Christ’ against ‘looking within’ like it’s either/or, one or the other.

Rosner doesn’t do this, he’s both/and. Ironically non-binary. Yet rather than this being a hang-up, it makes the book more biblical and more persuasive.

Yes, my identity is found in Christ and given to me by God, that’s true. But I’m also different to you. There’s something about me that makes me ‘me’ and not you. Sure, those things are not as central to my identity as my ‘in-Christ-ness,’ but that doesn’t make them less real. And if the current cultural mistake is making the periphery the centre, the solution is not then to make the centre the whole. Rosner avoids falling into either extreme and, as a result, his book is wonderfully compelling.

If the current cultural mistake is making the periphery the centre, the solution is not then to make the centre the whole.

Rosner acknowledges the legitimate place those other elements of identity formation should have. We look inward—‘The unexamined life is not worth living’ and all that. There are other sources of identity formation that also need to be acknowledged and integrated. We need to look around to our relationships (we’re social creatures, after all). We need to look both backward and forward to our story (how did we get to where we are now?).

Rather than going to extremes or slogans, Rosner welcomes and affirms these sources of identity formation as having a legitimate place. But he also argues it doesn’t work when they have the central position.

The central position belongs to what God says. Rosner shows how, as well as looking in, around, backward and forward, we also need to look ‘up to God to find your most defining relationship and to become part of his story.’ (207)

Rosner stands right in the middle of the New Testament’s teaching and summarises it with two short but profound verses: ‘whoever loses his life for my sake will find it’ (Matt 10:39) and ‘you are not your own.’ (1 Cor 6:19)

This is the New Testament’s beautiful, counter-cultural antidote to our modern identity woes.

In employing such verses, Rosner makes the centre the centre while also honouring the periphery and including it in the formula for success. This firm yet measured nuance was the strength of this book for me.

How to Find Yourself is brief. If you come to this book wanting a deep dive into historical cultural analysis, or an exposition on the Bible’s exposition on identity, or even a treatise of concrete next steps to turn things around, you’ll leave disappointed. Longer books exist on those topics—one of them is even written by Rosner himself.

Rosner speaks to all three topics but he does so with brevity. This is not a critique, it’s what makes the book what it is. I also don’t think there’s much value in critiquing a book for not being a different book. You can’t have everything in life.

But what this book sets out to achieve it more than accomplishes. It surveys a complex topic with simplicity and insight. Saying something that’s profound, quick, and easy-to-read is no mean feat. How to Find Yourself does it with kindness, empathy, and nuance and I’m so thankful it’s been written. This book is a gift.

Craig Hamilton is married to Nicole and they have three kids. He’s the Senior Minister at Pitt Town Anglican Church and spends most of his time talking about Jesus and leading people (so he’s probably in the right job!). When he’s not doing those things you’ll probably find him eating KFC, thinking about eating KFC, thinking he should probably go to the gym, deciding not to go to the gym today, hanging with his family, or reading books. He’s the author of Wisdom in Leadership, Made Man, and Wisdom in Leadership Development from Matthias Media. You can find out more things at revcraighamilton.com

2 The Ethics of Peter Singer: He Believes What?

4 What to Do With Santa?