Can Jesus save the West?

That’s the question Australian author Kurt Mahlburg seeks to answer in his excellent new book, ‘Cross and Culture: Can Jesus Save the West?’ Mahlburg is an author with the Christian organisation, The Canberra Declaration, for whom he researches and writes.

Mahlburg understands that the West was never perfect. And yet, his central argument that Christianity was the driver behind so much of what Christians and non-Christians value.

In our shift from Christian to secular, the West has arrived at new and alternate answers to life’s big questions … But there is a consequence to this: if God exists, then any worldview that fails to correspond with reality as God has assembled it will be beset with flaws. [1] 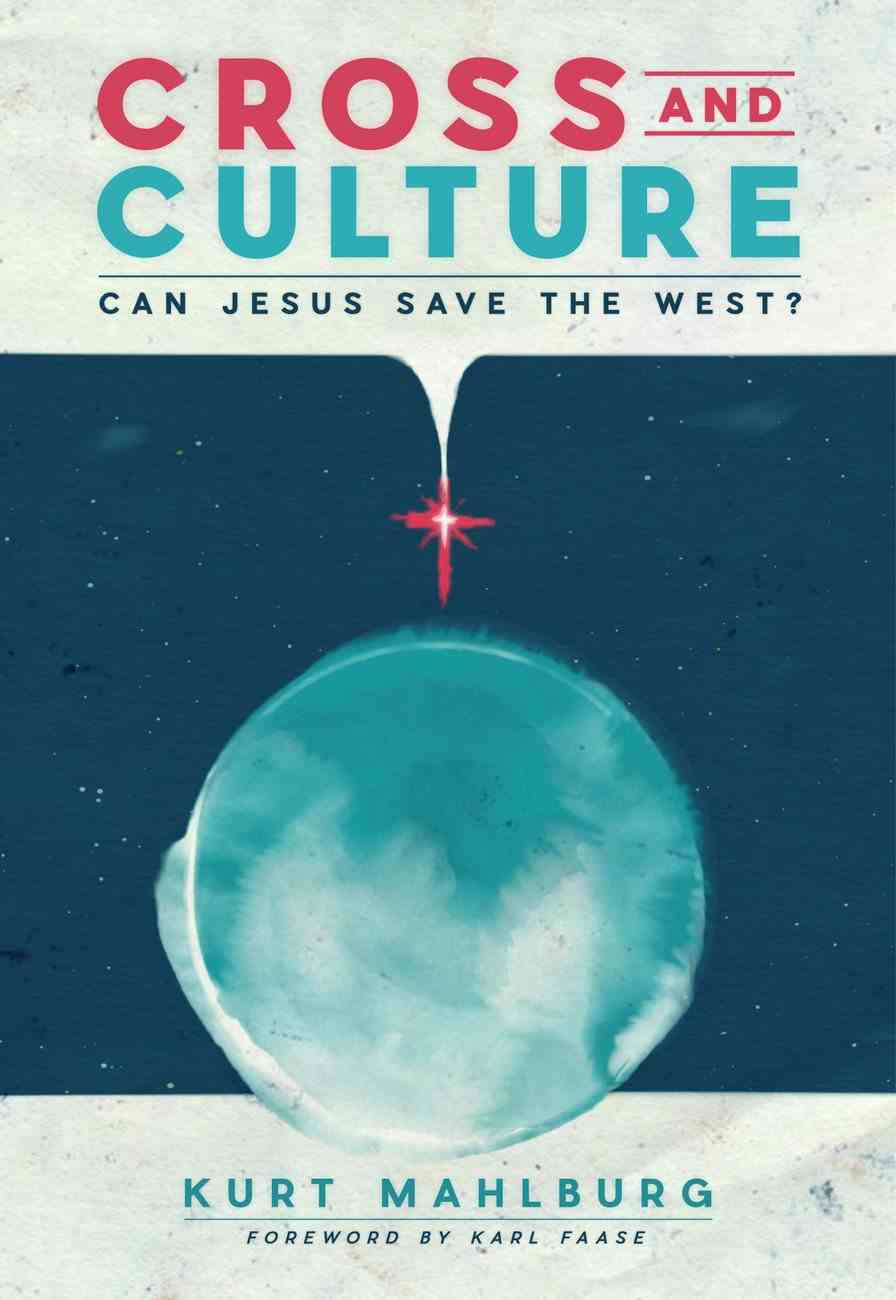 Cross and Culture: Can Jesus Save the West?

Cross and Culture: Can Jesus Save the West?

While being clear-eyed about the challenges facing the West, Cross and Culture is not a nostalgia-driven ‘Make the West Great Again’ manifesto, calling for a return to some mythical golden age in the past. Mahlburg understands that the West was never perfect. And yet, his central argument that Christianity was the driver behind so much of what Christians and non-Christians value (e.g. universal human rights), and the need to return to Christianity if we’re to maintain these values, makes sense.

How the West Abandoned God

He highlights the key movements, people and ideas that helped move the West in a more God-less direction, drawing on the work of thinkers such as Francis Schaeffer and Rod Dreher. These movements include nominalism (disconnecting the natural world from God); the Reformation (fracturing the West’s religious unity); the Enlightenment (placing humanity at the centre of life); the Industrial revolution (hiding God behind a rush of progress); and the Sexual revolution (making individual pleasure our new creed). [3]

As he points out:

These are the ideological fenceposts that we live within today. All Westerners experience the power of these ideas in their everyday lives, whether or not we are religious—or indeed, even aware of such ideas. [4]

Of course, nature abhors a vacuum, and with God pushed to the margins of Western life, a new and different creed has rushed in to fill the void.

Mahlburg outlines the belief system that has replaced Christianity: a post-Christian secular creed. This creed is unique to our western world, and are ‘unthoughts’—so baked into our thinking that they have become common sense. We see this creed everywhere: ‘in our music and movies, our industries and charities, our schools and sports and community events.’ [5]

Mahlburg does a brilliant job of showing the secular creed creed, and how different it is from the Christian worldview.

He outlines this creed by showing how it’s transformed the way we think about ourselves and our world: from ultimate reality to history, to morality, and identity. Mahlburg does a brilliant job of showing what this creed is, and how different it is from the Christian worldview. This section is alone is worth the price of the book. For example, when it comes to morality, we’re a culture that holds to moral relativism: ‘We can live how we like as long as we don’t hurt others’. When it comes to identity, we hold to ‘selfism’: ‘I define myself regardless of what other people say.’ When it comes to society: ‘individualism’ is king: ‘the individual is the only significant unit of society’.[6]

The Role of Christianity In Shaping The West For Good

Christianity had a unique and pivotal role in shaping the West, and Mahlburg does a remarkable job of summarising its impact on the West. Drawing on the work of many influential thinkers—both secular and Christian—Mahlburg shows us that although ‘we may be living in a post-Christian world … if we scratch below the surface, the legacy of Christian belief is still found everywhere we look.’ [7] This doesn’t mean that everyone has some hidden faith in God: rather, as T.S. Eliot points out:

An individual European may not believe that the Christian faith is true, and yet what he says, and makes, and does will all spring out of his heritage of Christian culture and depend on that culture for meaning.’ [8]

And yet, the ascent of the new secular creed has meant that Christianity is increasingly frowned upon, and even attacked.

When Christianity Becomes a Crime

As Western culture drifts from its Christian heritage and adopts a new secular creed, Christianity becomes increasingly marginalised. As Mahlburg points out:

[I]n the space of just decades, Christianity has gone from common sense to a social disease. In a dizzying flip, the “moral majority” has become an immoral minority. Christian belief is now widely seen as bigotry that must be confronted. And the Bible itself—the book on which our civilisation was built—is in the process of being redefined as hate speech. [9]

Mahlburg outlines the many and varied ways people of faith are coming under pressure: from well-known cases like Israel Folau, the pushback against Cooper’s Brewery, to many lesser-known cases. [10] The new secular creed—especially when mixed with the sexual revolution—doesn’t play nicely with dissenters. Its understanding of freedom of conscience is thin and one-sided, with freedom granted to those who want to express their sexuality, but not those who want to promote the Bible’s view of sexuality.

So, what can and should Christians do as our culture shifts around us?

What Christians Can Do in the Face of These Challenges

In the face of these challenges, Mahlburg is hopeful that cultural renewal and change can happen, just as it has in the past:

Every time enough people have followed the pattern of Jesus in announcing the good news and living out its values for the benefit of wider society, the West has seen spiritual revival and cultural renewal. [11]

Christians should live out their faith, evangelising and living ‘like light that shines in the darkness and shows others the way; like salt that heals, flavours, cleans and preserves our civilisation.’

This simply means Christians should live out their faith, evangelising and living ‘like light that shines in the darkness and shows others the way; like salt that heals, flavours, cleans and preserves our civilisation, for the benefit of everyone’.[12]

I know it’s easy for Christians to despair and become fearful of the future. But Mahlburg steers clear of this, seeing our current circumstances both as a golden opportunity, and a God-given responsibility (e.g., Mic 6:8) to love our neighbour well. A responsibility starting with setting our own house in order, and living upright, godly lives.[13] But this responsibility also involves using our political voice to shape and impact public policy. [14] His discussion on why Christians should be more politically engaged—for the good of our neighbour—is worth considering.

A Book for Our Time

Mahlburg is one of those gifted writers who’s able to take complex ideas and make them simple to understand, without being simplistic. His prose flows beautifully and was a delight to read. While looking at the sweeping changes gripping our society, he didn’t sacrifice nuance, being careful to trace the detail where necessary. All the while engaging with a range of different scholars, including Rieff, Taylor, Dreher and Shaeffer (to name but a few).

If I was to have one quibble with the book, it’s the (brief) section on collective national repentance. [15] While the example of Nineveh repenting as a nation seems like a good example (Jonah 3:7-9), I would have liked to see more New Testament discussion around this issue. Personally, I think nations should be held responsible for their historical actions—hence Australia’s responsibility to say sorry to the Indigenous stolen generation, for example. But what this this has to do with God judging nations (and whether societal decline is connected to that  judgement) could do with further exploration.

As the world changes rapidly around us, Can Jesus Save the West? Helps us make sense of these dizzying changes and consider how we might respond as God’s people.

Akos also has a Master of Arts (Theology).

4 Why We Can’t Sign. Two Evangelical Ministers Respond to the Ezekiel Declaration

Our Problem with Menial Labour