Over Easter we will be publishing some excerpts from Rory Shiner and Peter Orr’s new book The World Next Door. Here is a review by Steve McAlpine to provide a foretaste.

Learning to ride a skateboard is hard.

The key is “dropping-in”—that counter-intuitive act where you stand at the top of the bowl and lean into the fall, rather than doing what your body is crying out to do, which is to lean back. Lean in, and you are on your way. Lean back, and you’re on your butt.

If you can’t drop-in, if you can’t bring yourself to go against every grain and fiber of your being, you’re likely to drop out. Walk away, son. Choose something safer. Get a scooter.

When it comes to apologetic texts, The World Next Door is a fearless skateboarder.

When it comes to apologetic texts, The World Next Door: A Short Guide to the Christian Faith, by Rory Shiner and Peter Orr, is a fearless skateboarder, kick-flipping and grinding his way across a skate park full of scooter-imps.

This is a book that is a bold stand-out in a market dominated by timidity. It proclaims a faith that dares to be arcane, challenging, and even (superficially) obsolete in a world of smartphones, gender identity and bubble tea. 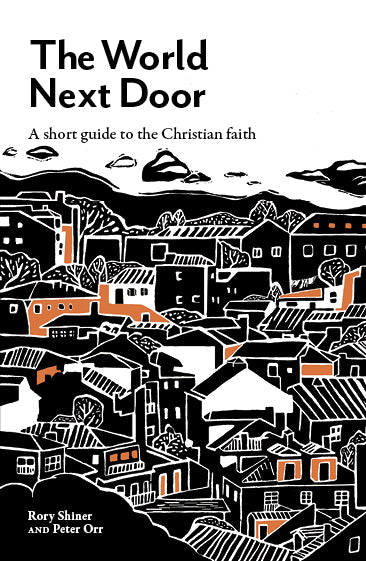 The World Next Door: A short guide to the Christian faith

The World Next Door: A short guide to the Christian faith

Taking the ancient but timeless Apostles’ Creed as their starting point, pastor Rory Shiner and atheist-turned-theologian Peter Orr introduce you to the fundamentals of the Christian faith. Fast-paced, entertaining, personal, and compelling, The World Next Door invites you into a world where Jesus Christ reigns supreme and where lives are changed forever.

And why not? For every William Lane Craig doing the dignified brainy thing—trying to persuade thinkers with sophisticated arguments—there’s a Ricky Gervais on the other side, simply smirking and jeering.

Shiner and Orr are here to respond to that. Theirs is a book for the Netflix crowd. It’s written with panache.

And I loved it. It’s the only apologetics book I would give unblushingly to my atheistic, science-saturated twin brother. He might reject it or get angry at it, but I don’t think he could ignore it.

I loved it. It’s the only apologetics book I would give unblushingly to my atheistic, science-saturated twin brother.

The World Next Door is counter-intuitive from the get-go. Even the title is a reverse-homage to James Sire’s The Universe Next Door—that classic resource for Christians seeking to check out their neighbours’ intellectual, moral and spiritual furniture.

Here the invitation is in the opposite direction: “Hey, we’ve been to your place and seen your Ikea setup. Why not come and take a look at our Eames chairs and retro turntable?” In other words, they recognise that Christianity has, once again, become a freak show to people in the West: misunderstandings, errors of fact, and general outrage abound. But rather than tidy up before the visitors arrive, Shiner and Orr lean in.

The weirdness continues with the decision to begin by talking about demons. I mean, you’ve called it a “short guide,” and you begin wasting time at the “all you can eat” salad bar? But it’s brilliant. The book starts with these words:

Jesus was an exorcist. He once cast a legion of demons out of a man and into a herd of pigs. They ran off a cliff and into the ocean and were drowned. True story.

If we go back to our skateboard metaphor, that’s Tony Hawk style. It’s audacious, and it works. It stands up and calls out the West on its failure to admit transcendent reality. It unashamedly talks about spiritual conflict—not as an “encouraging story,” or a “myth,” or even as a story with an “application,” but simply as a true story. We’ve spent decades trying to imagine no heaven above us and no hell below. Shiner and Orr just go, “yeah, nah” and it all makes sense.

Using the Apostles’ Creed to structure their arguments is another sign of their confidence. It’s a deliberate thumbing of the nose at those who would urge us to flatten Christian language and concepts in the name of relevance. Instead, by keeping it weird, old and traditional, Shiner and Orr present a Christian world that is orthodox, catholic and refreshingly “mere”. There’s no risk of this book running out of relevance in five years’ time (in the manner of the stone-wash blue-jeans Youth Ministry books of the 80s). Beginning with the creed throws down the gauntlet to such short-termism: “Read it now or read it in thirty years time, it’s all the same to us,” they seem to be saying.

By keeping it weird, old and traditional, Shiner and Orr present a Christian world that is orthodox, catholic and refreshingly ‘mere’.

Perhaps the weird contradictions of their backgrounds make them uniquely suitable for this enterprise. Peter Orr comes from a secular upbringing in that most religious of spaces, Northern Ireland. Rory Shiner had a solid fundamentalist childhood in the most secular state in Australia (WA).

Each author brings his background, along with his professional expertise, to bear. Writing as theologian/pastor (Orr) and pastor/historian (Shiner), the two deftly weave their way through the credal statements. They respond to difficulties compassionately but firmly. They employ biblical references liberally—but not as liberals. They really think the Bible means what it appears to be saying, and they want you to do so too. Jesus really did rise from the dead. Jesus really is coming back to judge. The Holy Spirit really is a person, not merely a manifestation of the universe’s desire for you to be happy.

And the church does matter. You know that icky place of your itchy-pants past, or that devastating place of historical abuse? God has made a place where you can go and get help.

And they proclaim forgiveness! Sweet, life-giving forgiveness! We live in a cancel-culture that continually threatens to shame us, and where restoration is a forlorn hope. But Shiner and Orr hold up the “the forgiveness of sins.” I won’t spoil the stories, the emotionally charged illustrations that Shiner and Orr use to show what (only) the gospel truly and fully offers. But let me say that if you buy this book only to help you with that person whom you struggle to forgive, or to give to that person who can’t let go of what happened to them in the past, then it will be worth it.

We all have neighbours out there living in their own worlds. I encourage you: be counter-intuitive. Buy five copies of The World Next Door and drop-in.

Steve McAlpine is approaching an age which would be a more than useful Test batting average. He works as a National Communicator for City Bible Forum, and is also pastoring a church in Perth. Steve grew up in Northern Ireland, but apart from rolling his “r’s”, and talking too fast, is a West Aussie through and through. He has degrees in journalism and theology and enjoys combining the two through writing and blogging, especially on matters of church planting and cultural negotiation for Christians in the increasingly complex West.