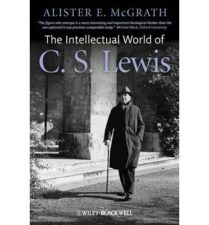 The English language has, I suspect, always been a mishmash of made up, stolen, and ever-changing words. We’ve incorporated everything from the Spanish vigilanteword to the German word wanderlust, seen William Shakespeare invent over 1700 of our commonly used words (impede, frugal, submerge, just to name a few), and seen the meanings of words change drastically (used to mean exactly 10,000, and awful used to be something “worthy of awe”).

And now myth commonly believed to refer solely to a “false belief or idea”.

However, for academics like C.S. Lewis, and his peers, such as J.R.R. Tolkien, the idea of myth and mythology was only tangentially related to falsehood. Thankfully, the Oxford English Dictionary still keeps their number one definition as something both Lewis and Tolkien would have understood:

A traditional story, especially one concerning the early history of a people or explaining a natural or social phenomenon, and typically involving supernatural beings or events

This quick journey down English etymology-lane is a necessary introduction to discussing Alister E. McGrath’s third essay, “A Gleam of Divine Truth: The Concept of Myth in Lewis’s Thought”, and the investigation of C.S. Lewis’s view of the Gospel as “true myth” – for we can not for even a moment allow the thought to occur that Lewis considered the Gospel to be false – he most assuredly did not, and repeatedly ensures that this is clear. As McGrath writes in conclusion:

Lewis’s musings on myth have alarmed some of his less literate admirers, just as they have riled his less literate critics, who both misunderstood his language, believing it to imply the factual falsity of the Christian faith. (74)

As McGrath continues, “we must therefore allow Lewis to define the term “myth” for us” (74). But even Lewis had to travel a distance before “myth” meant something more than untruth – “even Lewis used the word “myth” … to mean a fabricated untruth” (55). Thus begins McGrath’s wonderful exploration of the various threads which were not only to bring Lewis to his own specific definition of “myth”, but simultaneously the man’s discovery of a personal faith in God. This was no simple journey, and relied heavily on the intellectual side of Lewis being able to work through the many questions and issues he faced. Similarly, the impact of friends and mentors such as Arthur Greeves and J.R.R. Tolkien are vital to helping Lewis transcend his inherent doubts about Christianity: Lewis’s “rationalism led him to deny what reason could not affirm; yet [Lewis’s] imagination cried out for something deeper and more satisfying than the thin view of reality that this same rationalism offered.” (55)

Thankfully for Lewis, and all those who have since benefited from his writings, the key to his belief came through myth, and Lewis’s education landed him at Oxford University, an institution that was “the centre of intensive reflection on the nature of myth in the late nineteenth and early twentieth century.” (58) Also in attendance at Oxford was “the Oxford scholar who arguably had the greatest impact on the academic discussion of the literary significance of myth”, one J.R.R. Tolkien, who saw myth as a story which evoked a sense of the “numinous”. Lewis would soon come to discern that this sense of the numinous was a vital tool for understanding the Gospel, for as he wrote in a late essay, “Myths have the capacity to inspire awe on the account of their numinous qualities.” (62)

For Lewis, in the early 1930s, a lifelong desire for “something more” came to a head in conversations with Hugo Dyson and J.R.R. Tolkien, when a conversation held in September of 1931 broke down “the final barrier between Lewis and Christian faith.” (62) McGrath explains that Lewis was able to see Christianity not as “a set of doctrines or moral principles, but a controlling grand narrative – a myth in the true sense of the term”. (62) In other words, “the story of Christ is thus to be understood as “God’s myth” where the great pagan narratives are “men’s myths.” (62) Tolkien, specifically, helped Lewis see that the Gospel interacts with both our hearts and our minds in a way that simple fact cannot, and only myth can.

Using Lewis’s own words from across the vast spectrum of his written work, as well as biographical detail and a solid understanding of mythology, Alister McGrath provides an in-depth and captivating explanation of C.S. Lewis’s view of the Gospel as a “true myth”, and the way that such myth can convey reality. The culmination of Lewis’s view of myth may not be agreed upon by all, but its three conclusions (as described by McGrath) should definitely be considered necessary reading to all who want to understand the ways in which the Gospel can be read.

Joshua S. Hill is a writer from Melbourne, Australia. You can read more of his writing and reviews on his personal website, Facebook and Twitter @JoshSHill.

I am half way through my second year of a Philosophy degree. Like most philosophy students, I began my degree with dreams of grandeur (in fact, now that I think of it, that might be a prerequisite). Ready for the rigour of a classical education, I had the voice of Aristotle in one ear, and Simone de Beauvoir in the other. Of course, I also heard the niggling voice of the Apostle Paul—‘See to it that no one takes you captive through hollow and deceptive philosophy, which depends on human tradition and the elemental spiritual forces of this world rather...