Trying to work out which theological issues are more or less important and why has been something of a lifelong question for me. From my time as a Protestant boy in a Roman Catholic Primary School, to my current situation as a complementarian evangelical in a theologically mixed and majority egalitarian church, questions of theological difference have always confronted me.

My current sense that differences between complementarians and egalitarians are not worth splitting a church over is a case in point. So is my belief it’s worth dividing the church over differing views towards homosexuality. Is there a robust theological reason for taking a different approach with these two issues? Or is it just a case of what feels right and makes my life easier, or that others are doing the same?

In Finding the Right Hills to Die On, Ortlund is convinced there is a solid basis for treating different theological issues with different levels of seriousness. He borrows a metaphor to label the process: theological triage. Just as a triage nurse makes sure the sickest patients get seen first, so the Christian must rank theological issues and respond appropriately to matters of difference. 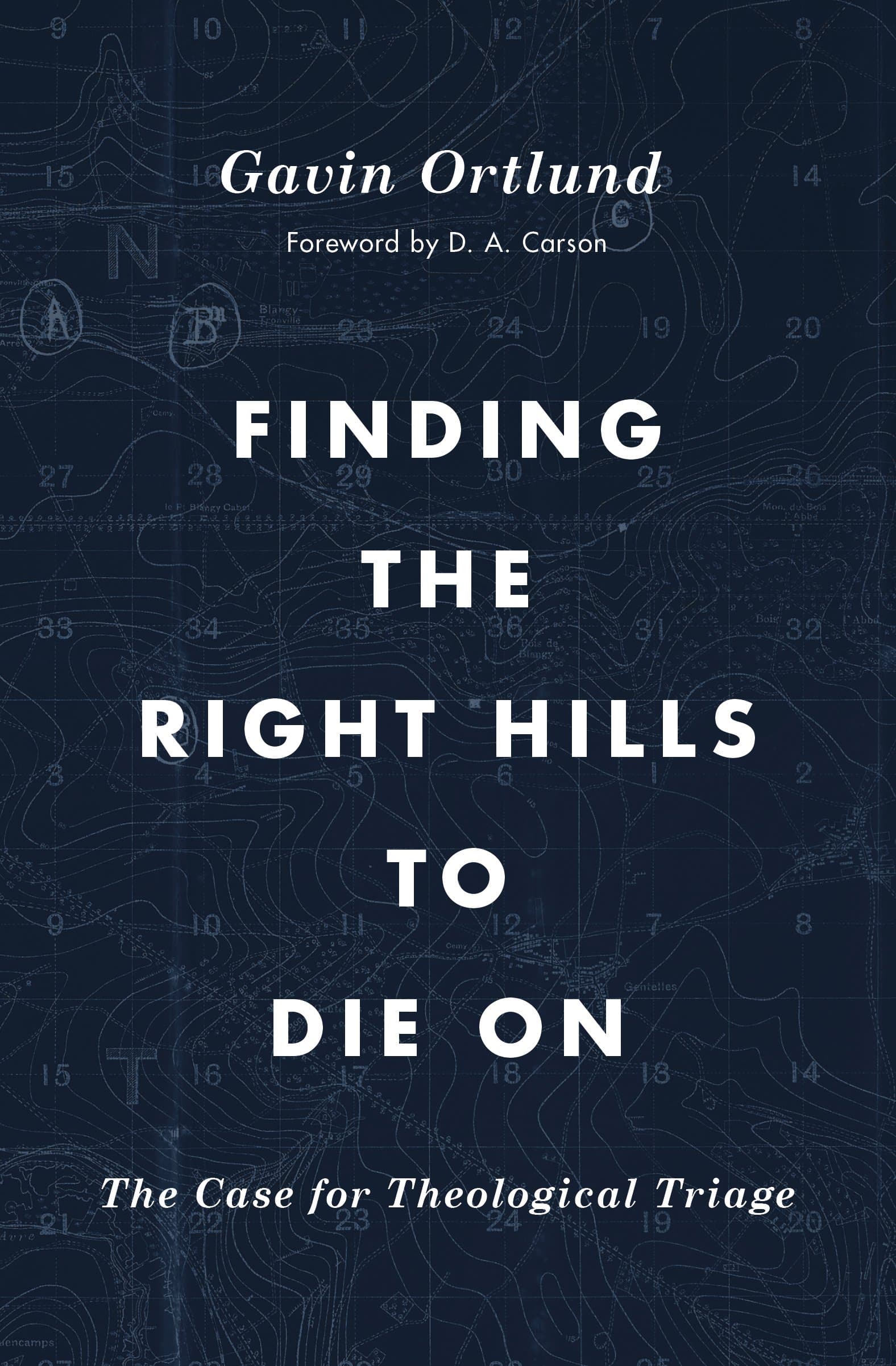 Finding the Right Hills to Die On: The Case for Theological Triage

Finding the Right Hills to Die On: The Case for Theological Triage

In theology, just as in battle, some hills are worth dying on and others are not. But how do we know which ones? When should doctrine divide, and when should unity prevail? Just as a medic on a battlefield treats the severely wounded first and then moves on to the less serious injuries, we must prioritize doctrine in order of importance. Pastor Gavin Ortlund implores us to cultivate humility as we prioritize doctrine into four ranks—essential, urgent, important, and unimportant—so that we will be as effective as possible at advancing the gospel in our time.

Setting up the Framework

It all sounds rather straightforward—but hold that thought! You still need to work out which doctrines belong in which rankings.

Ortlund spends two chapters justifying the triage approach. Most of us by nature are either too willing to divide on doctrinal matters or not willing enough to contend for theological truth. There is a chapter addressing each weakness, providing the reader with a helpful diagnostic tool. Answering the question, ‘Which chapter am I most challenged by?,’ probably tells you into which error you will most easily fall.

Most of us by nature are either too willing to divide on doctrinal matters or not willing enough to contend for theological truth. There is a chapter addressing each weakness

It soon becomes clear there is nothing neat and manageable about ranking theological controversy.

What begins as a discrete hierarchy of theological importance soon turns into a spectrum where some issues of a given rank are more important than other issues of the same rank. And the same issue might have a more important rank in one pastoral situation compared to another. Ortlund isn’t undermining himself here, nor do I find his analysis problematic. Theology is a complex business and there is much wisdom required in assessing every situation.

Ortlund continues by demonstrating how his ranking system would work in practice. If we want to rank theological issues, we need to take the same approach as a triage nurse: start by asking questions.

If we want to rank theological issues, we need to take the same approach as a triage nurse: start by asking questions.

Before outlining his own question list, Ortlund assess criteria others have made. One question Grudem asks jumped off the page at me as reason to treat the question of homosexuality as more serious than the question of women in ministry:

“Does it seem that the advocates of this teaching hold it because of a fundamental refusal to be subject to the authority of God’s Word, rather than because of sincerely held differences of interpretation based on accepted hermeneutical standards?”

In my experience, the answer for those advocating for homosexual inclusion is ‘Yes,’ and, for many advocates of egalitarianism, it is ‘No.’ Please note, this is a very different question to one I often hear: “Is this teaching clearly enough taught in Scripture that any departure from the doctrine reveals a refusal to be subject to the authority of God’s Word?” This second question too often exposes a belief that anyone who disagrees with the questioner on almost any matter must therefore have a low view of Scripture.

Ortlund’s own list of four questions for ranking issues are:

These are helpful things to consider. Some readers will be uncomfortable with the third and fourth questions, as they introduce criteria outside of Scripture for deciding how important a Scriptural doctrine is, but I am persuaded by Ortlund’s view. The historical church contains the wisdom of Christians reflecting on Scripture down the ages; it is a necessary humility to give due weight to their conclusions.

If taking a measured approach to theological difference which neither downplays the importance of sound doctrine nor Christian unity is important to you, then this book is a worthwhile read. It doesn’t claim to resolve all the issues which would not be possible in a book ten times the length. Nor will you necessarily agree with all of Ortlund’s conclusions (I did not). But it does give a helpful framework and raises many of the complicating factors that make this whole issue so tricky. It is a book which points us back to the gospel too. Ortlund’s exhortation we must always keep the gospel in view is worth repeating:

“We should eagerly pursue the kind of theological conviction and strength that is willing not only to fight for the truth but also to avoid fighting in order to promote the gospel.” (144)