I like reading John Dickson’s books. They are always incisive and yet accessible enough to lend out to members of the congregation without formal theological training. They are always written with one eye turned towards the non Christian reader. If they are not directly speaking to the non Christian, then they are helping the Christian be better equipped to promote the gospel among their non Christian friends. I also like reading church history. The lives of the saints of another era are so helpful in giving us clarity about serving the Lord in our own era. So I came to Bullies and Saints with high expectations and I was not disappointed.

I came to Bullies and Saints with high expectations and I was not disappointed.

The first thing that strikes you about Bullies and Saints is that this is church history as you haven’t read it before. In my experience, church history is usually about great theologians: Athanasius, Augustine, Luther, Calvin and Edwards; or about movements that brought renewal and revival: the reformation, the great awakening, and the evangelical revival. Another way to say it is that I’ve always looked at church history through the prism of the struggle between orthodoxy and heresy. And through that prism, you tend to skip over the years from about 400AD to 1500AD, which is more than half of Christian history. Dickson takes a completely different prism and throws new light on Christian history. If the usual prism is orthodoxy (right belief), Dickson’s prism is orthopraxy (right action). Where have Christians lived faithfully to Jesus’ teaching, and where have we lived nothing like our Saviour? And in taking this prism, we have the beneficial side effect of telling some stories from that time in Christian history about which I was ignorant. 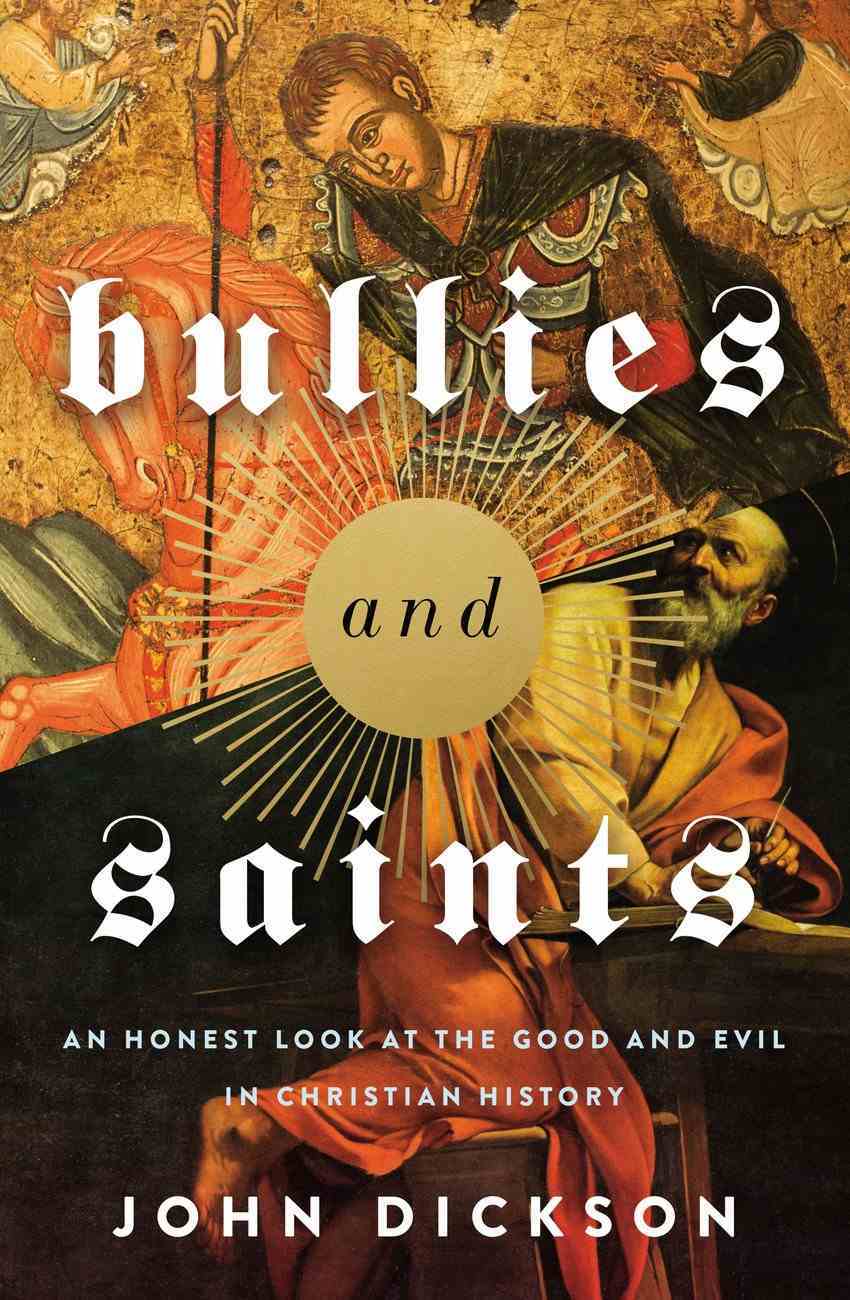 Bullies and Saints: An Honest look at the Good and Evil of Christian History

purchase
purchase on amazon Purchase from the Wandering Bookseller

Bullies and Saints: An Honest look at the Good and Evil of Christian History

So if you read Bullies and Saints, you too can become acquainted with “the greatest European you’ve never heard of”—Alcuin of York (AD 735-804). Alcuin was responsible for persuading the Holy Roman Emperor Charlemagne to abandon his policy of forced conversions amongst the tribes he conquered. Sometimes you will meet people you’ve met before in another context. The Cappadocian Fathers were familiar to me as defenders of the doctrine of the Trinity. But I was unaware that Gregory of Nyssa (AD 335-395) was the first fully fledged abolitionist in history, nor that Basil of Caesarea (AD 330-379) oversaw the construction of history’s first welfare centre and public hospital.

As the title suggests, Dickson is concerned not just to tell the highlights of Christian orthopraxy but also to plumb the depths of Christians failing to follow our Lord and Saviour. Most of us would prefer not to be confronted with these stories. They don’t sit comfortably with what we believe and we’d like to dismiss them with a brief, “Yes, Christians have done some terrible things over the years. But let’s not be discouraged by them. Let’s focus on the good that inspires us to follow Jesus.” But it’s actually important to be confronted by the evil in Christian history. First of all, so that we don’t present a triumphalist face to the world. Secondly, so that in observing the errors of those who have gone before us, we are warned against emulating them. Thirdly, because it’s good to have something to say to those who don’t share our faith about the snippets of history that reinforce their worldview.

Dickson’s account of the crusades is a sobering caution against triumphalism. No Christian can rightly look back on the crusades with other than profound shame. And yet, Dickson demonstrates that the crusades were not the suppression of Muslim power that is often made out. The crusades were largely a failed enterprise with little legacy in succeeding generations.

The story of the murder of mathematician and philosopher Hypatia in 415AD is a great instance of the reason why we need to study the dark spots of Christian history in order to be able to have a conversation with those who oppose our faith. Dickson demonstrates that this sorry episode from the 5th century is still a live apologetic issue for Christians today. (Which as an aside, is a great strength of the book. Dickson consistently provides a background in how the events he relates have apologetic impact today.) Both the 2009 film “Agora” and the 2017 book “A Darkening Age” tell the tale of how this incident ‘marked the beginnings of centuries of Christian misogyny and anti-intellectualism’. The truth is quite different.

Hypatia was lauded by a Christian intellectual, Socrates Scholasticus, as the intellectual superior of her male philosophical contemporaries. Many of Hypatia’s students were Christians. And the philosophic school that Hypatia was from continued to be a leading philosophical light in Christian Alexandria for centuries afterwards. Hypatia’s murder was the result of a conflict that got out of hand with a rogue bishop, Cyril of Alexandria. It was a tragedy and an example of the moral brokenness of Christians. But it was not an episode that can fairly be used to characterise the Christianity of the time either as misogynistic or anti- intellectual.

It was rather confronting to actually read Luther’s diatribe against the Jews… a great reminder not to deify anyone who is not Jesus.

I mentioned earlier that Dickson will introduce you to people you’ve met before in another context. This is not always a happy re-acquaintance. Martin Luther is one of my great heroes of the faith. How else could we describe the man who rediscovered the doctrine of justification by faith alone? I was vaguely aware that Luther had written some unfortunate things about Jews. But I had never read them because you focus on the great works—The Freedom of the Christian and The Bondage of the Will. It was rather confronting to actually read Luther’s diatribe against the Jews. We know that our greatest heroes have feet of clay, but this was still an uncomfortable experience. And it was a great reminder not to deify anyone who is not Jesus.

And with that reminder, it is time to ask the question is there anything to disagree with about Bullies and Saints? The chapter that I found myself disagreeing with was on Augustine’s just war theory. Dickson leaves the impression that Augustine’s just war theory was moving away from the practice of earlier Christians who had played the tune of Jesus well, towards that abuse of power that characterised later centuries. I would argue that earlier Christians at the Council of Nicea who declared that a Christian returning to being a soldier is like “a dog returning to its vomit” were being simplistic in applying Matthew 5. I’d also suggest that Augustine was helping Christians respond to a new social situation where Christians may be in positions of secular power. Augustine applied Rom 13 correctly in my view. And Romans is just as much the tune of Jesus as the gospels are.

I would thoroughly recommend Bullies and Saints. As well as for personal edification, I think it would be a great addition to a church history survey reading list at a theology college. By providing a different lens to view church history through, Dickson helpfully provokes us to reflect on how we choose the history we prioritise.