Simonetta Carr’s new book, Questions Women Asked: Historical Issues, Timeless Answers covers a topic close to my heart: the contribution of women to the history of the church. Even better, she seeks to do so using the women’s own voices—their letters, their books, their poems, their hymns, and their prayers.

Each of the thirty-one chapters focuses on one woman, gives brief biographical details, and distils the contribution of that woman to answer a key question of the Christian life. So, Marcella of Rome (circa 325–410) has a chapter entitled “How can I understand Scripture correctly?”; Dorothy Leigh (died. 1616) has one called “What should a mother teach her sons?”; Anne Dutton’s (circa 1692–1765) chapter is “Can women write about theology?”; and Kata Bethlen’s (1700–1759) is “Can I marry a nonbeliever?”.

Each chapter is not so much a biographical account of a particular woman, but a curated view of their contribution around a theme that Carr has discerned as a key question posed or encountered in that woman’s life of faith. It is not clear to me that the women under discussion would have identified these questions as their defining contribution, but all historiography is perspectival, and Carr acknowledges that the women asked more questions than the ones she focuses on. 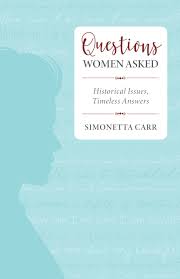 The book has a distinctively reformed theological flavour, with an emphasis on the sovereignty of God and the Scriptures. Marriage and motherhood are deeply honoured, while Carr also embraces the equality and biblically-informed differences between men and women in ministry and the family.

Questions Women Asked is well written and researched. It is intended for a female audience, and each chapter concludes with “Food For Thought” study questions. That is, this is history written for the purpose of equipping women today. There is a lot of encouragement in this book, if for no other reason than it is wonderful to see God’s hand at work. Through the centuries, in different times and cultures, we see him calling people (in this case, especially women) to himself, as they turn and cling to Christ in the midst of life’s many and great hardships and challenges. It is also humbling to realise that, while we might question aspects of their theology or practice, generations of people to come will likely do the same to us, unless the Lord returns first.

This is history written for the purpose of equipping women today

However, covering the lives and contributions of 31 women living on several continents over almost two millennia in one book is an ambitious project. There’s a lot that needs to be left out and/or assumed, and it is here that I have questions of my own. While there is plenty of fine-grained historical detail, including a timeline that places the women alongside major historical developments, there’s also a reasonable amount of assumed knowledge: historical, cultural, ecclesiastical, theological, and biblical. So, for example, Arminians (p. 247) are mentioned without explanation; so, too, the “doctrine of sola fide” (p. 86); the “Western Church” (p. 7); and John Wycliffe (p. 50). The substantive issues and debates of the Reformation and what motivated the Puritans’ quest are also not explained.

There’s a lot that needs to be left out and/or assumed, and it is here that I have questions

To illustrate, that sort of big picture background might help readers understand why Kata Bethlen was “distressed and frightened” about being forced to marry a Roman Catholic, which Kata considered to be a “different religion” (p. 169), but not distressed and frightened that he was her half-brother—a detail mentioned but not addressed by Carr, even though most modern readers would likely consider it deeply problematic, and more disturbing than marrying a Roman Catholic (p. 165)!

The issue of assumed knowledge particularly comes into focus in the “Food For Thought” sections. For instance, the chapter on Macrina the Younger (circa 327–379) finishes by saying the following without any real context or signposting:

Occasionally, however, the examples given by both Macrina and the Cappadocian Fathers fell into speculation. What caution would you offer to those who want to use similes and metaphors to explain biblical truths? Why can we trust the metaphors used by Paul in his letters? (p. 19)

Questions of a similar nature abound elsewhere. One asks, “The Reformers contested the medieval view that the contemplative life of withdrawal from the world represents a higher calling. Do you think they were right, and why?” (p. 52). Renée of France’s (1510–1575) chapter inquires, “Why do you think Calvin spoke so strongly against a dichotomy between the Old Testament and the New?” (p. 80). Puritan Anne Bradstreet’s (1612–1672) “Food For Thought” section has this: “The ‘vain fooleries’ of the Roman Catholic Church (among other things) convinced Anne that their interpretation of Scripture was not valid. What do you think she meant by this phrase?” (p. 133)

These are great questions! And there are others like them. Yet since Carr presents them without sufficient context—similar to the manner in which they are listed above—their benefit is likely lost on many readers, with their answers lying mostly beyond the book’s pages.

The risk is that personal reflection or group discussion based on the book and its questions will only be as good as the biblical knowledge and godly wisdom of the readers themselves and may not lead to the spiritual fruit Carr is clearly hoping to see produced. Personally, many of the questions related to matters of faith for which I myself would have appreciated more pointers as to where biblical answers might be found.
Nevertheless, this book is worth persevering with, and, despite this oversight, proved itself to be an encouraging and informative read. There is much to be gleaned from Carr’s work.

Claire Smith is married to Rob, and attends St Andrew’s Anglican Cathedral Sydney. They have a married son. She is a women’s Bible teacher, and the author of God’s Good Design: What the Bible really says about Men and Women (Matthias Media, 2nd ed. 2019), and contributor to the ESV Women’s Devotional Bible (Crossway, 2014) and Word-filled Women’s Ministry: Loving and Serving the Church (eds. Gloria Furman and Kathleen Nielson, Crossway, 2015). Claire serves on TGCA editorial panel, working to develop women writers and content.