Anyone who had the pleasure and privilege of encountering John Chapman, the late Australian evangelist, will know that a book titled The Chappo Collection will be worthy of space in their hearts and on their bookshelves. 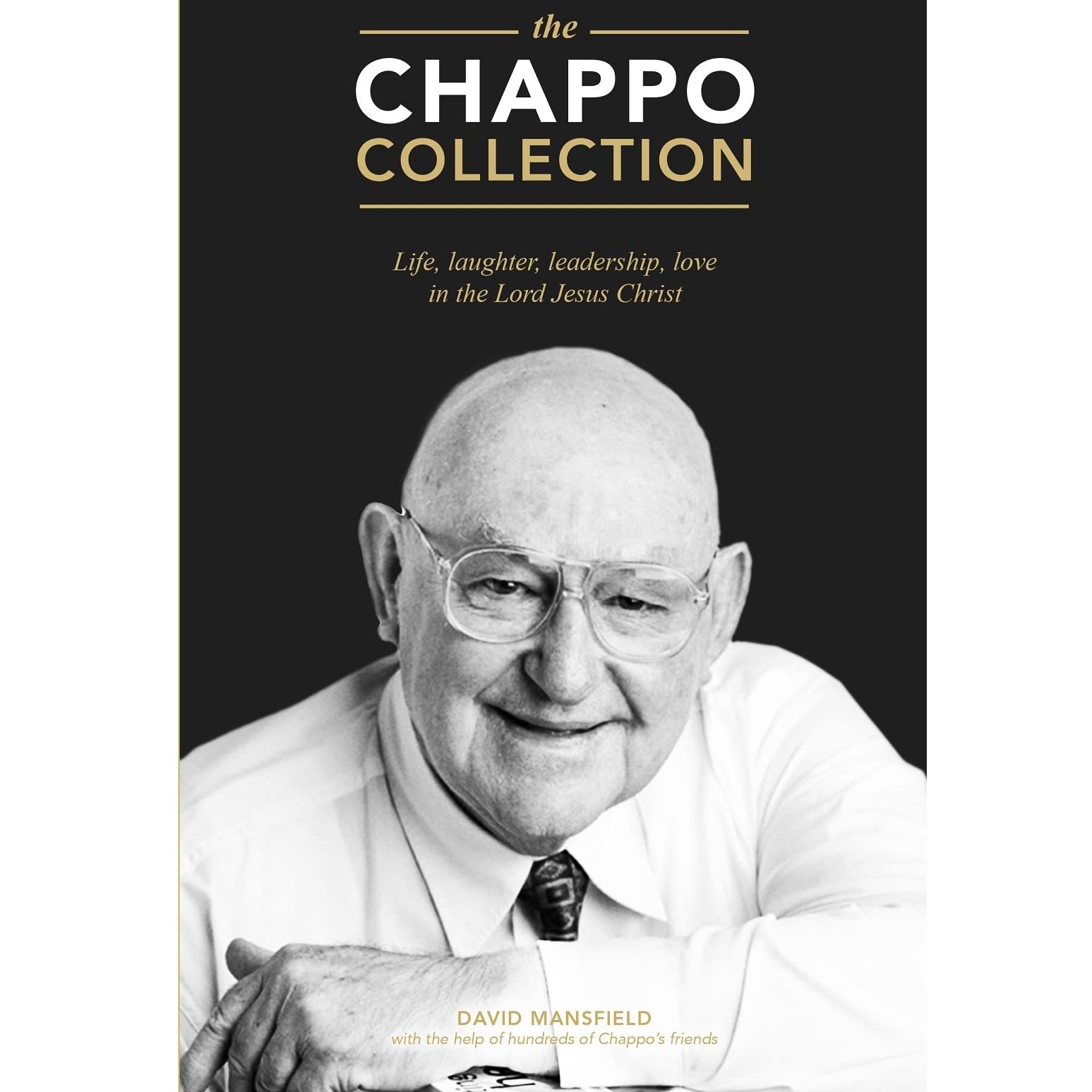 David Mansfield has, together with hundreds of Chappo’s friends, created a sizeable collection of stories that maps the life of John Charles Chapman in a way that presents Chappo as he was: a gospel-loving man of humanity, humility, hilarity and (for the sake of the alliteration) handiwork. Divided into five collections of stories and memories, The Chappo Collection tells the story of God at work in the life of an ordinary bloke who happened to live life in a way that touched everyone he encountered with gospel-giving love.

The Chappo Collection tells the story of God at work in the life of an ordinary bloke who happened to live life in a way that touched everyone he encountered with gospel-giving love.

If you are familiar with Chappo, you do not need a review to convince you that The Chappo Collection will be worthy reading. If you are not familiar with John Chapman here are just a few reasons to give the biography a read:

Chappo was by no means perfect, and that is clear in many of the stories told. So many (and with much hilarity) tell of his insatiable desire to be the centre of attention. Many convey his own concerns about this side of his gregarious personality that oftentimes tripped him up in ways he would regret.

Yet Chappo’s love for others is clear. He invested time, money, and much, much prayer into many lives, and their love for him comes out in this book. Significantly, they remember him less for his personality and more for his ability to live and breathe the gospel in every sphere of life.

Given the way people loved and revered him, it would have been easy for Chappo to have been proud. Yet, the stories in The Chappo Collection speak of his great humility. A stand-out story for me was one where a young pastor, Deryck Howell, found that his new ministry appointment happened to be Chappo’s local church. At first, he was quite nervous, but Chappo soon put him at ease. Deryck says that, “he was always gracious and never left people feeling that he had it all together. He was always pointing people to Jesus.” (p.48)

Chappo was able to present complicated ideas succinctly—with good humour and without the need to blow his own trumpet. A friend, who has also been reading the book, said her own daily Bible reading was revolutionised after reading Chappo’s answer to a question about how he maintained regular Bible reading and prayer in the midst of an extremely busy calendar. His answer? Succinct and spot on: “Oh, that’s easy. I just wake up, roll out of bed, read my Bible, say my prayers, and get on with my day.” (p.95)

I found myself laughing out loud far more often than expected when reading the biography of an evangelical minister. The stories of his antics as a student at Moore College in Sydney make for excellent competition when pitted against the stories of his antics on the tennis court or while entertaining others at his dining table. Wherever he went, in Australia or overseas, Chappo’s brand of humour left an indelible mark on the hearts and memories of those who had the privilege to laugh with him. The Chappo Collection is filled with hilarious stories from all around the world.

Chappo’s hobbies defied stereotype. He made knitted dolls for newborns, cooked meals for shut-ins—and the fruits of his labour remain prized by those who received them. A Chappo-made blanket or jumper is a treasure indeed. But perhaps the greatest treasures he left are the books he wrote and the many recordings of his sermons still floating about online.

My own Chappo stories begin with ignorance. At first he was just a name—a speaker at a Young Adults Easter Convention camp I attended in Cape Town, South Africa.

While I had been a Christian since the age of six, it was only in my 20s that I came to appreciate expository preaching and teaching.  An opportunity to be taught the Bible by an overseas speaker was always top of the list of reasons to spend the entire Easter weekend away with other twenty-somethings. Yet, listening to Chappo diving into the Word of God on that first night set the scene for the next three days. His clear, matter-of-fact style spilled over from the pulpit into the dining hall. There, young adults gathered around meal tables to pepper him with questions and to hear more of his stories.

Looking back, it amazes me that a man in his 70s, struggling with various health concerns, would happily pour his energies into such events—giving multiple talks for weeks on end, even while still recovering from brutal jet lag. When he visited again a few years later, my husband and I signed up for the YA Easter Convention with delight, knowing we were about to be spoiled with rich teaching, hilarious stories and a warmth that had every South African wishing to adopt him as our own.

From shore to shore, the legacy of John “Chappo” Chapman is one of where the gospel is front and centre. Chappo taught with simple clarity that often left listeners in absolute awe of Jesus and His Word.  This biography, The Chappo Collection, manages to capture both the character of the man and the gospel he loved so dearly.  It is well-deserving of that spot in our hearts and on our bookshelves.

Taryn Hayes co-hosts The Lydia Project: Conversations with Christian Women podcast with Tori Walker on TGCA. Until 2017, she and her husband, Craig, and their four children lived in Cape Town, South Africa where they spent many wonderful years as part of the St James Church, Kenilworth family. Today, Brisbane is their home city and Mitchelton Presbyterian their church family, where Craig and Taryn are involved in growth group ministry. In addition to homeschooling their children, Taryn is the author of the gospel-highlighting novel, Seekers of the Lost Boy (Naledi, 2013) set in Apartheid South Africa. Today, Taryn continues to enjoy writing both online and off when she can.